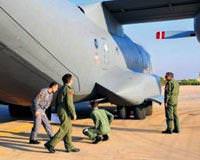 A Turkish military cargo plane was targeted by anti-aircraft fire in Libya on Sunday after it dropped humanitarian food aid but it returned to Turkey safely, Turkey’s armed forces said in a statement.

"Anti-aircraft weapons opened fire from the ground on the C-160 plane but our plane gained altitude and left the area," the General Staff said on its website.

It said the plane offloaded the aid successfully and returned safely to Turkey on Sunday after a stop at Benghazi airport.

State-run Anatolian news agency said two Turkish cargo planes had taken off from Benghazi and delivered 14 tonnes of aid near the Niger border and at Waddan, south of Sirte. It said investigations into the anti-aircraft fire were continuing.

Interim government forces fled in chaos from the town of Bani Walid and pulled back from Sirte on Sunday after yet more failed attempts to storm Muammar Gaddafi's final bastions and take control of the entire country.