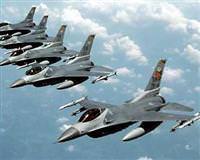 Turkey's military said on Wednesday its war planes had struck 152 PKK terrorist targets in northern Iraq over the past month and that the air strikes would continue.

Turkey has stepped up air and artillery operations on PKK targets in northern Iraq over the past months in retaliation for an increase in PKK attacks on Turkish security forces inside Turkey.

"Since August 17, 2011, 58 air sorties have been carried out in northern Iraq against hideouts, control points and weapons depots belonging to the terrorist organisation," Turkey's general staff said in a statement on its website.

After analysing aerial photographs of the target areas, it said, 152 targets had been hit.

"The activities of the terrorist organisation in northern Iraq will be closely monitored and as targets are determined, air operations will continue," it said.

The new wave of Turkish strikes, which began in August, are the first in more than a year on suspected PKK terrorist bases in Iraq and mark an escalation of the conflict that has spanned nearly three decades.