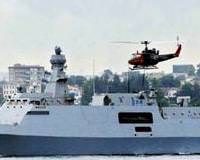 The Turkish flagged Piri Reis and a Norwegian ensigned seismic ship is soon to embark upon exploration accompanied by war ships and submarines. If needed, F-16’s will be deployed to the Turkish Republic of Northern Cyprus.

Ankara is setting a 200-mile stake in response to Greek Cypriots acting as the island's sole authority by way of allowing natural gas exploration in the Mediterranean.
A plan has been put into action in which the Mediterranean will be under a blockade from both the sea and air. Accordingly, the Turkish flagged Piri Reis and a Norwegian seismic ship will start working in the Mediterranean accompanied by Turkey's navy. If necessary, the Turkish Air Forces will deploy F-16 war planes to Northern Cyprus. Ankara considers the 200 mile open sea surrounding the mainland as being under 'Turkey's Exclusive Economic Region' status.
Respect will be shown however to the Cyprus Island and its 12 mile open sea. The region where southern Cyprus has granted permission for all petroleum and natural gas exploration parcels as well as the area where the U.S. Noble Energy company is currently working is all classified as Turkey's exclusive economic region.

POTENTIAL DOGFIGHT
While Turkey initiates its own seismic exploration, in return for Israeli's excuse of patrolling the platform set up in the Eastern Mediterranean for their collaboration with Greek Cyprus from the air, one or two F-16's may be deployed to the Turkish Republic of Northern Cyprus. With the signing of a Continental Shelf Agreement between Turkey and the Turkish Republic of Cyprus has opened a wide area surrounding the Cyprus Island for Turkey's petroleum and gas exploration. Turkey will be able to conduct exploration in an area which includes the 12 parcels declared by Southern Cyprus to have exclusivity. However, it is at this point where the Israeli and Turkish military may come face to face. Should Israeli warplanes escort the Greek Cypriots in their exploration efforts, Then Turkey, in accordance to the newly signed Continental Shelf Agreement, will be able to send military planes to the region. In order to act fast in such a case, one to two war planes may be deployed to the Turkish Republic of Northern Cyprus. As a result, the dog fight which transpired in the Aegean with Greek jets may be replayed however this time in the Eastern Mediterranean. The Greek press alleges that Turkish and Israeli F-16's are already flying close enough to clip each other. According to an article published yesterday, Turkish Air Force planes flew as close as 50 kilometers from the exploration area. Meanwhile, Prime Minister Erdoğan met with UN Secretary General Ban Ki Moon met yesterday in which he stated that the one-sided actions conducted by Greek Cyprus were damaging to the reunification negotiation process. "If the Greeks withdraw (referring to exploration efforts) then we will also step back."

With waters heating up due to petroleum exploration, Turkey is preparing to show its presence in the Mediterranean with a national war ship. The Heybeliada, a ship which has been a part of the MILGEM national ship project since 2004, will join the Turkish navy this Tuesday, September 27th. Heybeliada's first location of duty will be the Mediterranean. The Heybeliada, in comparison to the navy's other current war ships, has the capability to approach the target at a much closer distance before being detected by radar.