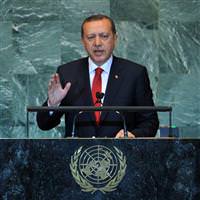 Prime Minister Tayyip Erdoğan said on Thursday his government aimed to draft a new constitution by the first half of 2012 and he would seek cross-party consensus to do so.

There is broad political agreement in the European Union candidate country on the need to update the constitution, which was written under military tutelage after a 1980 coup, but past attempts to reform it have been plagued by political bickering.
Analysts say a new constitution must address the demands of the Kurdish minority and consolidate the civilian government's oversight of the military, reforms long demanded by the EU to modernize the Turkish state.
"We will focus on the new constitution intensely with the start of new term in parliament. I hope rapidly, within the first half of 2012, we want to get this finished," Erdoğan told reporters before leaving on a state visit to Macedonia.
Erdoğan, whose AK Party won a third consecutive term in a June vote but failed to win enough seats to unilaterally pass constitutional reforms, has said he will work with the opposition to write a new charter.
Erdoğan is widely believed to want to change Turkey's parliamentary system into a presidential one, a proposal opposed by all opposition parties.
The pro-Kurdish Peace and Democracy Party (BDP), the largest party representing the Kurdish minority, said on Wednesday it would end a boycott of parliament, prompted by court rulings barring some jailed elected candidates from taking their seats.
Parliament reconvenes on Saturday after a summer recess. Any constitutional reform would need to be approved in a referendum.