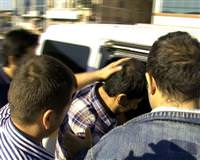 Police detained more than 120 people across Turkey on Tuesday as part of an investigation into the KCK terrorist organization.

Hundreds of people, including elected mayors, are already on trial on charges of ties to the PKK terrorist organization, as part of a two-year old case which has fuelled tensions in southeast Turkey.
A surge in PKK violence in recent months has sparked Turkish military air and artillery strikes against terrorist bases in the mountains of neighboring northern Iraq.
Police staged simultaneous dawn raids in Istanbul and southeastern provinces, including the main regional city of Diyarbakir, where 40 people were detained, including a deputy leader of the main Kurdish political party and several mayors.
Another 80 people were detained in Turkey's largest city Istanbul, the sources said. Istanbul police declined to comment.
Media reports said about 20 people were also detained in the southeastern province of Gaziantep, including the local head of the Kurdish Peace and Democracy Party (BDP).
The investigation is focused on an organization called the KCK, considered to be the PKK terrorist organization's urban wing.
Some 150 politicians and activists are being tried in Diyarbakir where a large courtroom has been specially built. Similar trials are being held in other cities across Turkey.
Deputies from the BDP party swore their parliamentary oaths at the start of the legislative term at the weekend, ending a boycott triggered by court rulings barring some of its elected candidates, jailed in the KCK cases, from taking their seats.
The renewed violence is another setback for a government initiative in recent years to boost the rights of minority Kurds who account for up to 15 million of Turkey's 74 million people.
Prime Minister Tayyip Erdoğan's AK Party government, fresh from a third parliamentary election victory in June, aims to achieve cross-party consensus for a new constitution to replace one drafted after a military coup in 1980.