Turkey spreads its wings into Africa 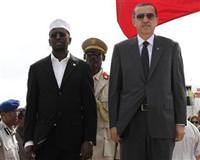 Prime Minister Tayyip Erdoğan visited South Africa on Tuesday, the latest stop in a diplomatic drive into the resource-rich continent whose attention is increasingly fixed on emerging market relationships rather than old commercial ties to Europe.

After a landmark August visit to Somalia and a tour of North Africa a month later, Erdoğan brought a large business delegation to Africa's biggest economy, a clear sign of his desire to boost trade from its current humble levels.
Having declared 2005 the "Year of Africa", Turkey has imitated Brazil in expanding its diplomatic footprint on the continent as a precursor to opening up new supply routes for its fast-growing, resource-hungry economy.
It now has 23 African embassies, equal to Spain and only just behind former colonial power Britain, with plans to open another half dozen in the near future.
"With respect to our policy to open up to Africa we would like to benefit from the expertise and experience of South Africa and we stand to ready to work together with South Africa in this effort," Erdoğan told a news conference after meeting deputy President Kgalema Motlanthe.
The expansion mirrors a similar push by Ankara in the Middle East where it has sought to promote itself as a model Muslim democracy.
Although dominated by the North African nations of Algeria, Egypt and Libya, overall Turkish-African trade has more than tripled in the past decade, reaching $15.7 billion in 2010, but far behind China's $125 billion in trade with Africa.
However, of that South Africa has only accounted for a tiny slice, with two-way trade of 5 billion rand in 2010.
Despite this, the $230 million acquisition in July of South African white goods manufacturer Defy by Turkish consumer electronics firm Arcelik suggests Turkish businessmen are excited by the continent's vast and largely untapped consumer markets.
"Turkey is beginning to flex its muscles," said Jeremy Stevens, an economist at Standard Bank, Africa's biggest bank by assets.
"It has managed to create a powerful diplomatic base off which to accelerate ties with Africa and many of the leading corporates have developed expertise and experience in Africa that can prove useful for the next phase of integration."
Erdoğan's visit also coincided with South Africa's decision not to grant a visa to the Dalai Lama, Tibet's exiled spiritual leader -- a reminder of the diplomatic clout of China, South Africa's biggest trading partner.
China emerged as Africa's largest trading partner in 2009, outpacing the European Union and the United States, Chinese state media said.