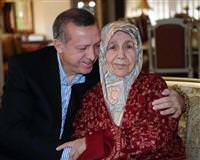 Tenzile Erdoğan passed away at 09:15 am this morning at the Medipol hospital in Kadıköy, where she had been receiving treatment. A funeral ceremony will be held for Tenzile Erdoğan tomorrow at noon at the Fatih Mosque after which she will be buried at the Karacaahmet Cemetery.
On September 30th at approximately six pm, Erdoğan's mother Tenzile Erdoğan was admitted to the hospital for stomach pains and a high fever. Radiology and lab results showed Tenzile Erdoğan had contracted acute cholecystitis and would need surgery. On October 1st at 11:00, Tenzile Erdoğan underwent a cholecystectomy (removal of the gallbladder). The operation was conducted by Prof. Dr. Hasan Taşçı and his team.
ANNOUNCEMENT FROM MEDIPOL HOSPITAL
An announcement from the Medipol hospital explained that after receiving surgery, Tenzile Erdoğan had spent five days in the intensive care unit for her recovery. On October 6th, 2011 she was moved to the normal recovery section. However, at 07:30 this morning she had a circulation problem which developed spontaneously and was readmitted to intensive care. Unfortunately despite all intervention efforts, Tenzile Erdoğan lost her life at the age of 88 at 09:15 this morning.
Prime Minister Recep Tayyip Erdoğan arrived to the hospital where his mother passed early in the morning. Prime Minister Tayyip Erdoğan and his siblings Vesile Erdoğan and Mustafa Erdoğan were visited at the hospital by a significant number of close family members and friends wishing to offer their condolences, including AK Party Vice-Chairman Ömer Çelik, Minister of Food, Agriculture and Husbandry Mehdi Eker, Istanbul Metropolitan Municipal Mayor Kadir Topbaş, AK Party Istanbul District Chairman Aziz Babuşcu, Üsküdar Metropolitan Mayor Mustafa Kara, Şişli Metropolitan Mayor Mustafa Sarıgül, Eyüp Metropolitan Municipality İsmail Kavuncu, Istanbul Department of Police Chief Hüseyin Çapkın, Istanbul Mufti Mustafa Çağrıcı, İTÜ Rector Prof. Dr. Muhammed Şahin, TDİ General Manager Burhan Külünk, football analyst Rıdvan Dilmen and businessman Ali Ağaoğlu.
Prime Minister Erdoğan will be welcoming visitors offering condolences at his residence in Kısıklı…
The Erdoğan family has since retreated to their residence in Kısıklı, having left the hospital with Tenzile Erdoğan's body just before noon. A number of close relatives and friends are paying visits to the home in Üsküdar's Kısıklı neighborhood. Security has been increased in the region as visitors continue to arrive to offer condolences.