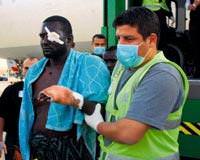 Turkey evacuated dozens of severely wounded blast victims from the Somali capital Mogadishu on Thursday, two days after a suicide bomber killed 72 people in the rebel al Shabaab group's deadliest attack since launching an insurgency in 2007.

The truck bomb wounded more than 100 others, many of whom suffered severe burns and broken limbs, overwhelming the coastal city's ill-equipped hospitals.

African peacekeepers said a lorry laden with drums of fuel rammed a checkpoint outside a checkpoint housing government ministries, where students had gathered to register for scholarships offered by Turkey.

Keen to strengthen its relations with Africa, Turkey has ramped up its aid presence in famine-struck Somalia and promised major infrastructure projects in the capital.

"Some of them are unconscious. These 36 victims are the first (to be evacuated) among those who are in a serious condition and can't be treated here in Mogadishu," Justice Minister Ahmed Ugas Bille told Reuters at the airport.

They were expected to arrive in Turkey later on Thursday.

Turkish Prime Minister Tayyip Erdogan visited Somalia in August as part of his country's push to deepen its ties with Africa.

The al Qaeda-allied rebels pulled most of their fighters out of Mogadishu in August but warned Somalis of further strikes on the city.