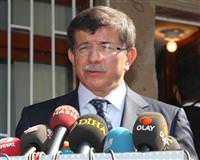 Turkey said France should confront its colonial past before giving lessons to others on how to face history, in an angry response Friday to statements by President Nicolas Sarkozy that Turkey should reface its past.

Sarkozy, in Armenia Thursday, challenged Turkey -- which is seeking membership of the European Union -- to face up to its past and threatened to pass a law in France that would make denying Armenian claims a crime.
Turkish Foreign Minister Ahmet Davutoğlu told a news conference: "Those who will not be able to face their own history for having carried out colonialism for centuries, for treating foreigners as second-class people, do not have the right to teach Turkey a history lesson or call for Turkey to face its history."
Turkey says both Christian Armenians and Muslim Turks died in large numbers as the Ottoman empire disintegrated.
Davutoğlu said Turkey and Armenia were working together on ways to normalize ties and Sarkozy's comments would have a negative impact on reconciliation efforts.
Armenia and Turkey, with the endorsement of the United States, the European Union and Russia, had agreed in 2009 to establish diplomatic ties and open their common border within two months of parliamentary approval.
Since then, Ankara and Yerevan have accused each other of trying to change the deal, throwing the process into question.
The two countries are also at loggerheads over Nagorno-Karabakh, a tiny mountain region mainly populated by Christian Armenians. It seceded from Muslim Azerbaijan and proclaimed independence after a 1990s war that killed 30,000 people.
Sarkozy, who has said he wants Turkey to be given special partnership status with the European Union rather than full membership, is regarded by many Turks as the embodiment of European prejudice toward a Muslim country.
Turkey, a Muslim-majority country with a secular democracy and a growing economy, has seen its influence increase in a changing Middle East.
Turkey had good relations with Sarkozy's predecessor Jacques Chirac and Turkish officials say their contacts with France are otherwise cordial.