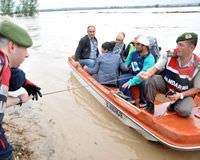 Three bodies have been recovered from the Antalya Governorship’s search and recovery efforts for missing persons in the devastating flooding in the town of Gebiz located in the Serik district.

According to a written announcement from the Antalya Governorship, a search mission with the aid of 100 people, including 30 from search and rescue teams from Afyonkarahisar and Konya and 40 forestry workers as well as volunteers, have been trying to located six missing persons from the heavily flooded Haskızılören village.
The announcement, which reveals that three bodies have been recovered, goes on to state:
''We have recovered the bodies of Hasan Bulut and Fatma Kutlu from Gediz as well as the body of an 80-year-old man from the Hacıosmanlı village in Ermedin, whose identity has yet to be determined. Forty heavy machinery trucks from the Special Administration are currently working in the region and every form of emergency and humanity aid has been procured to the region."
AFAD, sends one million liras worth of emergency aid to the region, as requested by the Antalya Governorship
The Prime Ministry Natural Disasters and Emergency Situation Department (AFAD) have sent one million liras worth of aid.
AFAD Vice-Chairman Ejder Kaya had announced in a written announcement that they would be sending one million liras in aid to assist in the flooding in Antalya as a result of the heavy downpours.
Kaya also announced that 30 personnel along with machinery and rescue vehicles from the Konya and Afyon District Natural Disaster and Emergency Situation Departments have arrived along with four helicopters, 42 vehicles and 193 personnel are continuing to search for missing people.
According to the announcement, 85 people from the Manavgat, Aksu and Serik districts as well as from the town of Gebiz and neighboring villages have been saved in recovery efforts from both land and air.
According to initial findings of damage assessment efforts also assisted by five technical personnel sent from AFAD, out of 210 flooded residences, 25-30 were heavily damaged, and 45,900 decares of agricultural land owned by 262 farmers were also harmed.