Erdoğan lashes out at Sarkozy 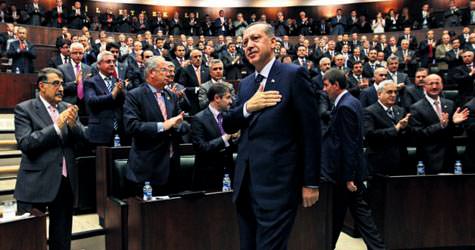 "(France) The President of France (Nicolas Sarkozy) goes off to Armenia and from there tries to offer his own recommendations to Turkey.
First of all you need to take your own advice, clean up your own act. To say one thing in France and another in Armenia and then to come to Turkey and be totally different, this sort of two-sided or three-sided political leadership is not right. You have 600,000 Armenians and 500,000 Turks in your country. On the one hand, you are engaged in very form of relations with Turkey however, you do not think big, instead, for a minute issue; you take on this stance solely because there are different economic opportunities. I am sorry but Turkey is not that easy of a bite.
To carry the title of being a state leader means to act in the name of future generations and not upcoming elections, and necessitates taking action to unify humanity instead of increasing polarization. For those who do not comprehend this, who remain 'French to the situation', by the time they realize the truth it will be way too late.
(Also in reference to Sarkozy) "When you mention Africa, all you can see is the shine of diamonds."

(ISRAEL) "In the U.N., we witnessed very clearly who believes what in the Palestine case. Those who for years have said that Palestine should become a state began to sidestep as soon as the issue made it to the voting stage in the United Nations.
You cannot just say that they should reach an agreement amongst themselves. For ten years now, they have been unable to come together and reach a consensus."
"WE ARE ON THE RIGHT PATH"
Also touching on the new constitution, Erdoğan stated: "We are on the right path. This parliament will have completed the job by the end of the year. Our political parties should not sacrifice the issue of the constitution for political rivalry."