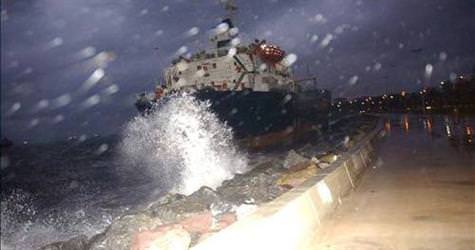 The cold and rainy weather that has drifted into the Marmara region from the Balkans has transformed into heavy downpours and north-east windstorms.

The periodic downpours that have engulfed the Marmara region and primarily Istanbul increased overnight developing into heavy storms. Due to the difficult weather conditions Istanbul's Car Ferry Lines, Inter-city Sea Bus services and Express Ferryboat services have faced cancellations. In some locations, the strong winds have resulted in uprooting trees and causing large waves in the sea.
Due to the increasing wind speeds in the city, trees have been uprooted in certain locations. Temperatures have noticeably dropped and winds reaching 60 km an hour have resulted in the developing of large waves in the Bosphorus. Despite the heavy rainfall and storms, heavy flooding has not been reported.
According to information released by the State Meteorology Department, the cold and rainy weather is anticipated to continue until Wednesday after which temperatures are expected to increase.
FERRY SERVICES CANCELLED
Due to the harsh weather conditions prevailing in the Marmara, sea transportation services have been curtailed. A number of Istanbul's Sea Ferries operated by İDO have been cancelled.
According to an announcement from İDO, the 08:00 Armutlu-Armutlutk/Yenkapı-Bostancı, 08:15 Pendik/Yalova, 08:15 Yalova/Pendik, 08:30 Yenikapı/Yalova, 08:35 Bostancı-Kartal/Yalova, 09:00 Yalova/Yenikapı, 09:30 Pendik/Yalova lines, 09:30 Bursa-Yenikapı-Kadıköy and the 10:00 Yalova/Kartal services have been cancelled. The 18:00 Bursa/Yenikapı fast ferry boat service has also been cancelled due to unfortunate weather conditions. In addition, the Eskihisar - Topçular Car Ferry line and the Bosphorus Line, Avcılar services and the Kabataş-Islands-Bostancı are currently not in operation.