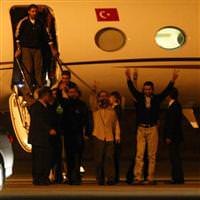 Eleven Palestinians made V-for-victory signs as they arrived in Turkey early on Wednesday as part of the thousand-for-one prisoner exchange.

Israeli soldier Gilad Shalit and hundreds of Palestinians crossed Israel's borders in opposite directions on Tuesday under the swap, one of the biggest ever such exchanges between the two sides.

A private plane flew the ten men and one woman from Cairo to the Turkish capital Ankara, where they were met at Esenboğa Airport by the Palestinian ambassador to Ankara Nabil Maarouf and Turkish foreign ministry officials.

"We are grateful to the Turkish government for its support in the process of releasing the Palestinians and bringing them to Turkey," Maarouf was quoted as telling reporters at the airport.

"God willing we will continue to seek Turkey's support until Palestine attains freedom," he added.

Media reports said the 11 were spending the night in Ankara but it was not disclosed where for security reasons.

Turkish Foreign Minister Ahmet Davutoğlu had announced on Tuesday that about 10 Palestinians would come to Turkey. Some 40 of the Palestinians were sent to Turkey, Syria and Qatar.

Turkey's once-close ties with fellow regional power Israel have deteriorated sharply since Israeli naval commandos killed nine Turks in May 2010 in a raid on a ship carrying aid to the Gaza Strip.

Turkey downgraded diplomatic ties with Israel and halted defense trade after the Jewish state confirmed last month it would not apologize for the raid.