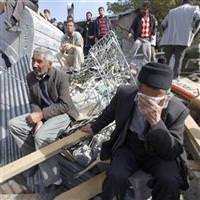 Turkey clung to hopes on Wednesday of finding survivors under rubble three days after a powerful earthquake killed at least 459 people, and the government finally requested foreign help to shelter thousands of homeless families.

The survival of a 14-day-old prematurely born baby girl called Azra had lifted hearts Tuesday. She was flown to the capital Ankara with her injured mother.

At a demolished building in central Erciş, the town hit hardest by Sunday's quake in eastern Turkey, rescue workers who had worked non-stop for more than 48 hours switched off their generators and lights, convinced no one could be left alive.

Seconds after the lights went out, they received word that someone trapped below had made contact on a mobile phone.

"There are three people trapped under there. When we lifted a concrete slab, the phone must have been able to get reception," said one rescue worker, as the lights were turned back on and his team returned to their job.

While the death toll stood at 459, officials said it was likely to rise as many people were still missing.

Survivors being treated at a hospital in the provincial capital Van told of their ordeal while waiting to be rescued.

"We were holding our breath, we were thirsty. At some point we saw rescuers working to remove rubble. They said, 'Hold on for five minutes, we will get you out of there'. But they didn't rescue us that day," Omer Yildiz told Reuters.

"It was a nightmare, a really bad nightmare. I still can't believe how I bore staying there for 33 hours. It turns out I am really patient."

Complaints over the lack of tents have grown louder with each passing day, and some desperate survivors fought among themselves to try and grab tents being distributed by relief workers from the back of a truck.

The Turkish Red Crescent has been struggling to deliver fast enough to provide shelter for victims of the quake shivering in freezing temperatures at night.

Rain fell in the region Tuesday, with expectations that the first winter snow would fall soon.

Having started out by saying Turkey could handle the disaster alone, Prime Minister Tayyip Erdogan's government put out requests Tuesday to 30 countries, including Israel, for emergency materials, including prefabricated housing, tents and containers.

Israel, whose ties with Turkey hit rock bottom after Israeli commandos killed nine Turks on board a Gaza-bound flotilla last year, immediately said it was launching an airlift of supplies, starting with a shipment of prefabricated homes Wednesday.

Japan's embassy in Ankara said its government was donating $400,000 to the relief effort and would be sending urgently needed items including tents.

People in Van, Erciş and other towns and villages in the region were fearful of returning to their damaged homes as more than 200 aftershocks have rattled the quake zone since Sunday.

Prisoners in a jail in Van rioted Tuesday because they feared they would be crushed in their cells when a 5.4 magnitude aftershock struck and spread panic out on the streets.

The inmates set fire to the jail and fought their guards before troops were sent in to quell the violence. Firefighters put out the flames.

Members of parliament from a pro-Kurdish party joined negotiations between prisoners and officials to restore calm.

"Inmates naturally wanted to go out in the yard after the strong aftershock. They weren't allowed, there was chaos," said parliamentarian Aysel Tugluk.