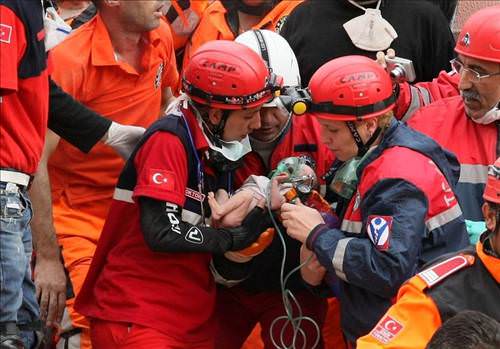 Rescuers pulled a two-week-old baby girl alive from the arms of her mother, who had also survived but was still trapped in the rubble of their apartment on Tuesday, two days after a powerful earthquake in southeast Turkey.

The mother was clutching the infant to her chest when rescuers reached them, and they were working to bring her out, as well as a grandmother, who was also still alive.

"I am so excited. What can I say. Let God help them," the child's other grandmother, Sevim Yigit, told Reuters, eyes brimming with tears of joy beneath her headscarf.

As she spoke, a rescuer leaned forward to reassure her: "We're going to get them out soon."

There was no word on the father, who had also been in the building when it fell.

The grandmother said the baby, named Azra, was born two weeks ago.

The large crowd gathered at the scene applauded when a rescuer emerged cradling the baby in his arms. Relieved relatives pressed forward as she was taken to an ambulance.

"We have been waiting for almost 48 hours," said a teenaged boy cousin, whose mother was also missing. "I hope my mother and aunt will be rescued as well."

The family had been trapped since the apartment block, several stories high collapsed when the 7.2 magnitude quake stuck early on Sunday afternoon.

One side of the building was reduced to a pile of broken concrete masonry and mangled metal, while the other side was leaning, only propped up by a crane so that the rescue operation could continue more safely.


The baby's mother and a grandmother were also brought out alive on stretchers to jubilant cries from onlookers who followed the dramatic rescue under cold, pouring rain.

"It's a miracle!" said Senol Yigit, the uncle of the baby, Azra, whose name means "purity" or "untouched" in Arabic. "I'm so happy. What can I say? We have been waiting for two days. We had lost hope when we first saw the building," he said sobbing.

However, hope of finding more people alive under the rubble faded with every passing hour as more bodies were found.

The death toll from Sunday's 7.2-magnitude quake rose to 459, with 1,352 injured, the Disaster and Emergency Administration said. The final count was likely to rise further as many people were still missing and 2,262 buildings had collapsed.

Thousands prepared to spend a third night in freezing temperatures in crowded tents or huddled around fires across a quake-prone region in Van province, near the Iranian border.

More buildings collapsed in Erciş, a town of 100,000 people, than elsewhere.