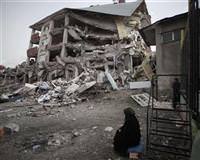 Standing near homes that have become deathtraps since Sunday's massive earthquake, the men of the Turkish village of Guvencli gazed at the leaden sky and predicted more deaths unless they were given shelter before the winter snows arrive.

"In fifteen days, half of the people here may be dead, frozen," Selahattin Karadeniz, 47, whose mud, timber and brick house held up better than most in Guvencli, a village of some 200 homes.

The first snows normally fall in November, blizzards are common and ground can stay white until April among the hills at the eastern end of Lake Van, Turkey's largest lake, close to the border with Iran.

"This is the land of winter," said Hilmi Gulgeldi, a villager in his fifties. "To stay outside after this time is impossible. It falls to minus 25 degrees, minus 40."

Fahrenheit or Celsius, either way it spells death.

The toll from the 7.2 magnitude quake, the biggest to hit Turkey in more than a decade, had risen to 471 with search and rescue operations still going on three days later.

But the disaster has "affected 600,000," according to the provincial governor, with people in the towns and villages frightened to sleep in homes they feared were too fragile to withstand aftershocks rattling the area.

While relief efforts first focused on the provincial capital of Van, a city of 1 million, and Ercis, a town of 100,000, outlying homesteads were left waiting longer for help.

Half way between Van and Ercis, villages wedged in the desolate, barren hills belonged in another century to the urban centers even before the quake.

On the way to Guvencli were ruins of houses on each side of the winding, muddy track road. Some completely flattened, other with walls missing.

At one, a large tent was being used for the menfolk to come together, drink tea, discuss their problems and offer condolences to bereaved relatives and neighbors.

Angry over relief received so far, the men of this traditional herding community complained bitterly of neglect.

"Nobody can say there is no aid. There is aid but it is being distributed unjustly," Karadeniz said. "We don't have any water, any electricity. Aid comes and then ends up in someone else's house and we get nothing."

People who had measured wealth by their livestock, faced up to the prospect of their animals dying as the barns that protected them from the deadly cold now lay in ruins.

He was more worried about his cows and goats being left in the open.

"No animals can take this weather for more than a fortnight. The barns are unusable, ruined."

Townsfolk camping in the open have leveled similar accusations of disorganized and unfair distribution of aid.

But with night time temperatures already plummeting below freezing, the desperate need for more tents and blankets appeared, if anything, more acute in the villages.

Rather than leave the land, people appeared intent to wait on promises.

"It is the tents where kids, babies can be protected. They say we will get prefabricated houses in 1-1/2 months," said Zeki Yatkin, a 46-year-old man who lost his father in the quake. "We can't tolerate the cold but what else can we do?"

Sat outside a large white tent provided by the Turkish Red Crescent, while his wife brewed tea on a stove inside, Ogunc said too many people were being crammed together.

"The most urgent thing we need is more tents. Six families have to squeeze into this," he said pointing inside the tent that was some 5 meters (15 feet) across.

"Last night it rained and we couldn't light the stove. It was freezing, said Ogunc. "Our cars freeze, it's normal that people freeze to death too."

At Ogunc's house, green walls were scored with cracks and the ceiling was held by up by half a dozen wooden beams that could not be trusted to withstand many more jolts, with strong aftershocks still shaking the ground with alarming regularity.

In the house next door, rubble covered the beds -- a grim warning against sleeping with a roof overhead.

"Everything we need is under the ruins -- our clothes, blankets, duvets everything," said Yatkin.

"We receive bread but we need tents."