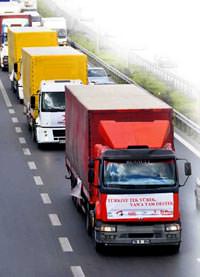 Aid delivered to Van and Erciş, which was devastated in the recent earthquake tragedy, continues to increase. SABAH newspaper has collected 140 tons of needed supplies in seven lorries which departed from the Marmara Natural Disaster Logistics Center in Kartal with the participation of Turkish Red Crescent Chairman Ahmet Lütfi Akar and SABAH newspaper Associate Editor Metin Yüksel. Amongst the aid sent were dried goods such as chickpeas, lentils and beans, diapers, baby food and hygienic supplies.
Drawing attention to the fact that following the earthquake Turkey has unified, Red Crescent Chairman Akar stated; "I want to thank Turkuvaz Medya Grubu for their work with the Red Crescent on all of these forms of social responsibility activities they embark upon and for their help and belief in us. I want to thank them on behalf of the disaster victims and those trapped under rubble."
"THE NATION'S HAND OF COMPATION"
Stating, "I am addressing the Turkish public from here, by way of SABAH and ATV," Akar went on to say, "Let us trust in the Red Crescent. Turkey's Red Crescent is the hand of compassion for the Turkish public. We have the power to surpass all disasters as a nation. The television broadcast staged the night before last in which all media organs unified, showed that as a nation we are one heart that does not consider religion, language or race as a divisive factor. I want to express that these are also the Red Crescent's principles."
Touching on the aid being sent to the natural disaster zone SABAH Associate Editor Metin Yüksel stated, "SABAH newspaper, which yesterday ran to the aid of Pakistan and Somalia, today is running to help our brothers in Van. From here on out we will fulfill our duty to establish communal sensitivity to every point that needs help."
THEY MAY HAVE NO ONE, BUT…
Aid continued to rain into the region yesterday. Last night, under the slogan '30,000 Beşiktaş Fans, 30,000 Scarves', Beşiktaş supporters collected the scarves and hats they wore to the derby game against Fenerbahçe and sent them to Van. In Kayseri, orphans from the Child Protective Services donated 305 lira collected from their pocket money to give to the Kimse Yok Mu Derneği (Is Anyone There Association). In Sivas' Gemerek district, students from the Yurter Özcan Yatılı District Elementary School also donated their spending money to the earthquake victims.
In Gaziantep, workers from the Şehitkamil Municipality flocked to the municipality in order to donate blood. Women from the Malazgirt district in Muş spent hours cooking bread for earthquake victims. Meanwhile, the Antalya Metropolitan Municipality Toy museum has begun a campaign to donate toys to the child victims of the earthquake.
MOBILIZATION FOR TENT CITIES
HSBC Bank will be donating 540,000 liras to the Red Crescent.
Vakıfbank will offer storeowners, artisans and SME's credit with zero interest, a six month grace period, and a 24 month term of up to 100,000 liras.
Türkiye Finans will be offering all of their bank customers from Van free-of-charge money transfers.
Kipa has decided to send winter clothes and as Tesco Group to donate 25,000 pounds (72,000 liras).
ING Bank will be postponing all debts belonging to earthquake victims.
The Koç Conglomerate has announced that they will be providing tents for 800 families in the earthquake zone; they have also sent 7.5 tons of aid supplies.
Kayseri Şeker Factory's Pansu Su has sent 107 tons of water.
Konya Şeker A.Ş. and the Beet Growers Cooperative Union have helped by sending food and blankets.
Sürat Kargo will be transporting supplies such as tents, blankets, heaters and dried goods for free.
The Müjdat Gezen Theater will be donating all proceeds acquired through their Saturday night performance of "Dur Bi Dakka" to Red Crescent.
Doğtaş Furniture has sent 200 beds to the earthquake zone.
Google.org has donated 500,000 dollars to Turkey's Red Crescent.
Avea will be setting up a 100-tent city in Alaköy.
Medical Park Gaziantep Hospital has sent a ten-person medical team to Van.
The Press Advertisement Association has secured 100,000 liras worth of advertisement for 11 local newspapers.
The General Directorate of Foundations is sending 10 boxes of dried goods, six tons of dried meat and 3,000 underwear supplies.
The Denizli Chamber of Commerce has sent 50,000 liras.
Anadolu Ajans has begun an aid campaign. The Turkish-Jewish Association has sent one thousand blankets.
Teachers and students from Cumhuriyet University have donated blood.
Students from the Fevziye Mektepleri Vakfı Işık University will be sending their food allowance for one month.
The Sivas Sports Club has sent 5,000 pieces of clothing.
TÜRK-İŞ and Türkiye Kamu-Sen have initiated aid campaigns.
Ankara's Industry and Businessmen's Association has also begun a campaign.
Turkish associations and Turkish community representatives in New York and New Jersey are also collecting donations.
Revenue acquired from the Cumhuriyet Rally in Fethiye, Muğla will also be sent to the earthquake victims.