Death toll in Van rises to 582 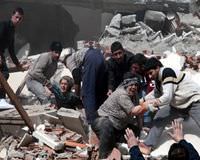 The death toll in the earthquake which hit eastern Turkey on Sunday has risen to 582, with 4,152 people injured, the Van Disaster and Emergency Administration announced.

In a statement, it also said 187 people had been rescued alive from collapsed buildings since the quake, which struck Van province on Sunday afternoon with a magnitude of 7.2.
In Van, six buildings were demolished in the quake. Search and rescue efforts have been completed for five of the buildings; however six personnel are continuing to search through the rubble of the final building.
In Erciş, 65 buildings were demolished in the quake, 58 of which search efforts have been completed. There are 26 team members and 150 personnel working on the remaining seven demolished buildings.