Today we celebrate the 88th year of the Republic 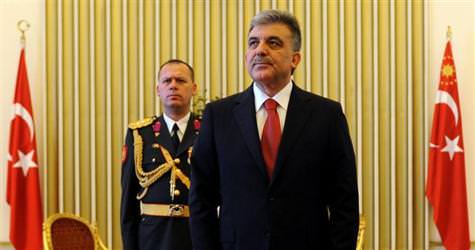 Today marks the 88th anniversary of the foundation of the Republic, Members of the state have gathered at Atatürk’s Mausoleum to commemorate the event.

The ceremony held at Anıtkabir and attended by senior state officials began with the reading of the national anthem, followed by President Abdullah Gül's signing of the mausoleum's special journal. President Gül penned, 'We are proud of our nation's success and continue to head straight for success."
This year, Republic Day celebrations, including an official reception and parade, have been cancelled in light of the recent earthquake in Van and the loss of 24 soldiers in the line of duty due to terrorist actions.
EMPHASIS PLACED ON VAN EARTHQUAKE AND TERRORISM
President Abdullah Gül released a message to commemorate this October 29th Republic Day in which he emphasized efforts to draft a new constitution, terrorist attacks and the earthquake in Van.
Some highlights from Gül's Republic Day message:
EMPHASIS ON TERRORISM: Nobody can say that the slaying of innocent people on the street, and massacring youths in their prime and organized attacks on the state's security forces has anything to do with democratic demands by people of the region.
WE HAVE BECOME ONE HEART: Our public has displayed the best example there is of solidarity, offering help and brotherhood. They have become one heart for Van.
NEW CONSTITUTION: We must continue first and foremost to prepare a new constitution in line with the development of society as well as our reforms, to increase our competitive economic strength, democracy, and to realize such principles as human rights and law and state at the most advanced standards. I am pleased that there has been established a communal consensus on this matter.
OUR DEMOCRATIZATION EFFORTS HAVE BEEN INSPIRING: The comprehensive changes that have been made in recent years in the state's further democratization efforts have become a source of inspiration for the public of nations in our surroundings that desire change.
MUTUAL OBJECTIVES
Prime Minister Recep Tayyip Erdoğan also mentioned the new constitution in his announcement for Republic Day. 'We are the heirs of a great civilization of justice and peace and as brothers we must embrace one another and join tightly together in order to establish altogether a brighter tomorrow."