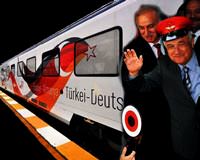 Dozens of Turkish pensioners and their families arrived in Munich on Sunday, dazed but elated after a four-day train journey from Istanbul to commemorate the trip they first made 50 years ago in answer to Germany's call for workers.

Invited by a then West Germany anxious to find labour to power its post-war industrial boom, the Turkish workers never intended to settle, nor did the Germans want them to.

But families followed from Turkey, the Gastarbeiter or "guest workers" as they were called bore children, and over the decades a three-million strong community formed.

The community changed the fabric of German society, and symbolised modern Germany's transition from a nation based on common German ethnicity to a country of immigration.

About one million of those with Turkish roots today hold German citizenship.

Elif Sen, one of eight children from a central Anatolian family, took the train from Istanbul to Munich in 1969 at the age of 18. It was the first train ride of her life.

"I thought I would go for a year," she said. But she met her husband, had children and stayed.

The 50th anniversary of the signing of the German-Turkish labour agreement in Bonn, which laid the framework for Turks to come, is being marked with a wealth of exhibitions, film festivals, and visits at the highest level, as Germany says an unprecedented "thank you" to its migrant workers.

"The labour agreement changed our country," Chancellor Angela Merkel said in a video message on her website. "The migrants contributed to Germany's wealth and they became a part of our nation."

She and Turkish Prime Minister Tayyip Erdogan will meet the first generation of Turkish workers in Berlin on Wednesday.

In her message Merkel urged Turks in Germany to learn good German, and said there was still much work to be done on integration. She also accepted that youngsters of Turkish origin can face discrimination on the labour market.

Immigration is a highly sensitive and politically charged issue in Germany, which with more than 10 million immigrants has quietly become home to the world's third largest immigrant population after the United States and Russia.

While people of Turkish origin appear in all areas of public live in Germany, including German national footballer Mesut Ozil, a hero in both countries, or politician Cem Ozdemir, co-leader of the Greens, thousands of youngsters with Turkish roots are now moving to Turkey, believing they can find better chances in Turkey's rapidly growing economy.

On a visit to Berlin in September President Abdullah Gul urged Germans not to view the Turkish community as economic migrants who did not return home, but as a group whose hard work contributed to Germany's post-war economic miracle, and who enriched and galvanised the country.

For many Turks in Germany the attention surrounding the anniversary is bewildering. Some say the celebrations mask continuing prejudices while others hope it will spark honest debate. Massive media coverage has certainly brought home to a large German audience the hardship faced by the first workers as well as the scale of their and their families' achievements.

Poignant photo exhibitions show anxious Turks saying goodbye to their families at Istanbul's Sirkeci railway station as they waited to leave for destinations whose names they could barely pronounce, or undergoing humiliating physical examinations as German officials decided which workers they would take.

"I planned to work a few years, buy a car, then return to Istanbul and work as a taxi driver. But once we had children, who went to school here, we stayed," said 75-year-old Ferit Guclu, who arrived in newly-divided Berlin in 1962.

"I was dazzled by how many jobs were available."

He first worked laying roofs, then as a locksmith, then at a bank, where he interpreted for Turkish customers. Today Berlin is home. His two sons, one with a German passport, one with a Turkish, are married to German women.

Guclu worked hard to learn German, and believes many of the problems encountered by Turks of his generation came from the fact they did not learn German.

"They didn't show much interest in learning German, they were mainly concerned with making money," he said.

For youngsters now from the second or third generation, identity is a complex issue. "My roots are Turkish, and I would say I feel more Turkish than German, but I couldn't imagine living in Turkey. Berlin is home," said 20-year-old Emine Ozbek.