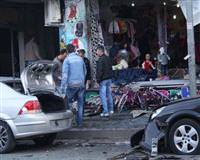 A female suicide bomber in southeast Turkey killed three people and wounded around 20 in Bingöl, on Saturday, police said.

The blast occurred at a tea house close to the office of the ruling AK Party in the town's main street at around 6.20 a.m. EDT, Interior Minister Idris Naim Sahin said.
Police said the woman had detonated explosives strapped to her body. They also said they were hunting for another suspected bomber, and a cordon had been thrown round the town, 110 km north of Diyarbakir, the region's main city.
"It was very quiet. There was nothing extraordinary. There were no policeman, no gendarme in the street," one bystander stated..
"Suddenly we heard an explosion and screaming. People ran toward there to help people injured. Then we saw paramedics coming."
Turkey is fighting a long-running battle with terrorists in the southeast, and the blast comes as the government is trying to provide relief to thousands of people made homeless by a powerful earthquake in the Van province.
Sahin was addressing a news conference in Van, where he is part of the team overseeing relief work.
In Diyarbakir, police used water cannons to disperse stone-throwing youths in a protest as the bodies of 24 PKK terrorists killed in a military operation more than a week ago were held in a morgue in nearby Malatya town.
The military killed 49 in total after mounting a hunt for terrorists on the border with northern Iraq, after 24 Turkish soldiers were killed in simultaneous attacks on their posts in Hakkari, the most southeasterly province.
In Hakkari on Saturday, soldiers shot a mule they suspected militants had packed with explosives and sent toward them. They later detonated the explosives on the dead animal.