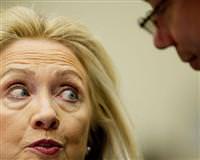 Hillary Clinton, speaking to the American-Turkish Council in Washington, said the "Turkish miracle" had seen that country's economy triple in size over the last decade as reforms opened up both the political and economic sectors to new competition.

"Turkey's ability to realize its full potential depends upon its resolve to strengthen democracy at home and promote peace in the neighborhood," Clinton said in prepared remarks.

The United States and Turkey have seen trade and diplomatic ties expand as NATO-member Turkey assumes a more prominent regional role. Ankara agreed in September to host an early-warning radar system to help spot missile threats coming from outside Europe, including from Iran.

Clinton said Turkey's new power provided it with an opportunity to demonstrate "responsible leadership" and urged Ankara to work with Israel to overcome differences over Israel's Palestinian policies and its killing last year of nine Turks aboard a Gaza-bound activist ship.

"We have been dismayed by the deterioration of relations between Turkey and Israel," Clinton said. "We continue to urge both countries to look for opportunities to get this important relationship back on track."

Clinton underscored U.S. support for United Nations mediation efforts in Cyprus, where Turkey has responded angrily to drilling by U.S. company Noble Energy in waters it says belong to Turkish-backed northern Cyprus but are more widely recognized as belonging to the Cypriot government.

"We believe that public rhetoric must be kept to a minimum to allow the parties to achieve a solution," Clinton said.

"And while we recognize the right of the Republic of Cyprus to explore for natural resources in its Exclusive Economic Zone, including with the assistance of U.S. firm Noble Energy, we look forward to both sides benefiting from shared resources in the context of an overall agreement."

Clinton stressed that Washington would continue to back Ankara in its fight against the PKK, and that the United States hoped Turkey would one day achieve its long-deferred goal of joining the European Union.

"Reducing tensions with neighbors and increasing stability in the neighborhood is a recipe for expanded growth and influence," Clinton said.

"Turkey's leaders understand this. But it will take bold choices and strong political will to leave the past behind and embrace the future Turkey deserves."