Record donations for Van by provinces which lost soldiers 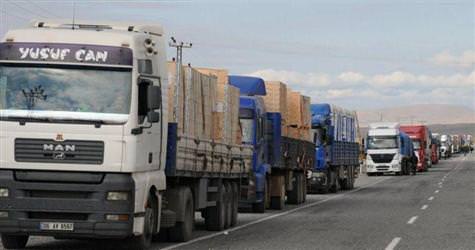 Twenty-one provinces that suffered losses of soldiers killed in the line of duty in the Çukurca attack have opened up their hearts to the earthquake victims from the 7.2 magnitude Van quake. Supplies sent by these provinces alone have reached up to eight million liras in worth.

The 7.2 earthquake which rattled Van last Sunday has once again brought out Turkey's many layers of 'brotherhood, solidarity and unity'. Turkey in its entirety, from the east to the west and the north to the south, has become a 'single heart and single wrist' in sending aid to Van. Out of the aid delivered to the region, the most interesting may possibly be the relief provided by the provinces which lost 24 soldiers in the line of duty in the attack that took place in the Çukurca province's Hakkâri district. The 21 provinces that lost soldiers in the Çukurca attack are as follows: Adana, Ağrı, Aksaray, Artvin, Aydın, Çorum, Elazığ, Erzurum, Gaziantep, Isparta, Hatay, Kahramanmaraş, Kırklareli, Kocaeli, Konya, Sakarya, Samsun, Sinop, Yozgat, Istanbul and Ankara 24. The supplies offered by these districts, which include food, hygienic supplies, baby food, clothes and blankets as well as numerous other similar supplies have been calculated as costing 7,993,148.82 liras.

SOLDIERS DONATE SPENDING ALLOWANCE
One of the most emotional donations offered recently was done so a few days ago, by unites that have lost fellow soldiers or officers. Soldiers from the Hakkâri Mountain Commando Brigade, the Çukurca District Police Department and soldiers based at the border patrols located in Van are not only conducting search and rescue efforts but at the same time are donating their very limited spending allowance to the earthquake victims.

TWENTY MILLION TO THE RED CRESCENT
This sentiment of 'Union' was also evident with the historical simultaneous broadcast done by television stations in order to collect donations. The 'One Heart for Van' program, which was simultaneously broadcasted on 19 stations, including a number of leading Turkish television stations such as ATV, Kanal D, FOX TV, Star, NTV and CNN Türk as well as on radio stations including Radyo D and Radyo Moda successfully collected record donations totaling 62 million. Aid campaign's initiated by the Red Crescent in which donations were made through SMS messages, banks and call centers were responded to with great sensitivity throughout Turkey. In one week alone, 29,369,000 TL in aid has been collected. Amongst the donations that have rained in, the majority were sent to the Red Crescent through various banks. For example, 10,066,000 liras were donated through banks, while nine million liras were donated through SMS messaging, six thousand liras were donated through the internet and 81,000 liras were donated through call centers.

VOLUNTEERS TO MELT THE MOUNTAIN OF AID
The aid sent in from all over the country is being held up in storage depots due to the inability to sort through everything that has arrived. With storage depots filled, lorries carrying aid are then forced to wait in line to unload. Volunteers are offering up their services in order to overcome the difficulties in sorting out the aid delivered. Meanwhile, the governorship has announced that the greatest need at the moment is for volunteers. Meanwhile, a number of businesses have begun to open up their shutters after being closed the entire week.

According to AFAD, the Prime Ministry's Emergency and Natural Disaster Administration, as of yesterday at noon, 601 people had lost their lives due to the quake. A written announcement by AFAD also stated that TOKİ, Turkey's Housing and Development Administration, will be taking on the duty of building permanent residences in the areas affected by the quake. "Residences for the earthquake victims will be completed as soon as possible. In addition, the production of sufficient containers to provide temporary housing has begun and they are planned to be set up in the region as soon as possible."
The announcement also stated that the Van Center has completed all search efforts in demolished buildings, however in the Erciş district there are two buildings remaining where efforts are still ongoing. The announcement also issued a warning regarding entering damaged buildings and relayed information on aftershocks. The announcement stated that there had been 637 aftershocks measuring between two and three in magnitude and 859 measuring between three and four in magnitude, with 108 measuring between four and five magnitude and seven aftershocks between five and six magnitude, totaling 1,769 aftershocks overall.

155 CHILDREN ARE NOW ORPHANS
With the death toll from the quake standing at 601 citizens, 155 children have lost parents. Out of the 155 children suffering from the deaths of parents, two of those have lost both parents.