Rescue under way after Van earthquake 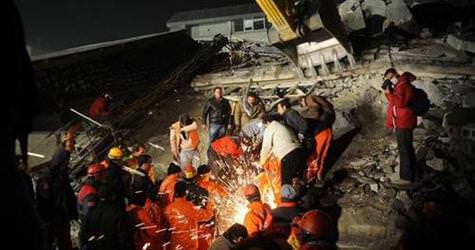 Rescue workers are searching for survivors under the rubble of collapsed hotels in Van, after an earthquake which killed at least seven people.

Rescue workers are searching for survivors under the rubble of collapsed hotels in Van, eastern Turkey, after an earthquake which left at least seven people dead.

Yesterday's earthquake comes less than three weeks after another killed 600 in the same area.

Search and rescue teams worked through the night and have rescued 23 people from the ruins of two hotels, a statement from Turkey's Disaster and Emergency Administration (AFAD) said.

State television channel TRT said at least 100 people may still be trapped under collapsed buildings after the magnitude 5.7 earthquake struck 16km south of the city of Van, at 7.23pm Irish time yesterday.

One reporter said as many as 70 people may have been staying at one of the hotels.

Deputy Prime Minister Besir Atalay, who visited the collapsed Bayram Hotel with Turkey's Foreign Minister, said 25 buildings had collapsed in Van, of which 22 were empty.

Only two hotels and a residential block had people living there.

Some 22 planes are carrying rescue and medical teams to the region, AFAD said.

The earthquake comes after a 7.6 magnitude tremor hit just northeast of Van on 23 October.

There have been hundreds of aftershocks since and thousands of people are still camping out in tents in freezing conditions.

Foreign Minister Ahmet Davutoglu, who had been in the nearby town of Ercis at the time of the quake, visited the crisis coordination centre in Van.

Around 30 ambulances stationed in Ercis - the worst hit area in last month's quake - were sent to Van in the wake of the tremor.

Other rescue teams were travelling to the quake zone from the nearby provinces of Mus and Agri.