A five-kilometer ‘no fly zone’ along the border 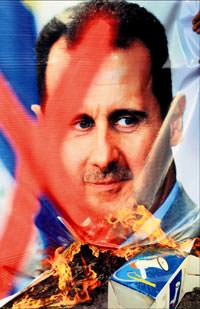 A plan in order to protect civilians in Syria includes establishing a five-kilometer no flight zone along the border with Turkey.

SABAH has acquired details of the plan for Syria put forth by the oppositional forces. The first step of the plan directed at Syrian State Leader Bashar Assad, which the opposition has discussed with the Arab League and Turkey, involves establishing a five kilometer no-fly zone along the Turkish border, south of Aleppo.
According to the request put forth by the Syrian opposition, following meetings in Ankara and Cairo, the regulation will be established by the United Nations and implemented by Turkey, with the Arab League's support. NATO will not be involved in this process in any way. The plan aims to widen the ring of Assad opponents within Syria, while also strengthening their plight coupled by the increasing division of the Syrian military. The following are further details of the Syria plan:

500 OBSERVERS IN DAMASCUS: Observers from the Arab League, including UN personnel will head to Syria. Expected to reach the 500 number, the report from observers on Assad will be the first form of pressure exertion. Negotiations on this item continued yesterday in Rabat.
ARAB LEAGUE ACTIVATED: The Arab League will request the UN establish a 'no flight zone' in order to protect civilians. The biggest hold up on this issue may come in the form of convincing Russia and China. However with the increasing death toll as each day passes, it may be difficult for Russia to object, however a military operation as conducted with Libya will not transpire, nor will they be ordered to take a position.
ALEPPO BLOCKADE: The no flight zone, which will initially be announced for a five kilometer-wide buffer zone south of Aleppo and under Turkey's supervision is expected to expand in time.
TURKEY TO RESTRICT FLIGHTS: Turkey will be restricting flights under the support of the Arab League, the United States and the EU. This restriction will allow for defectors in the Syrian military to escape with their families and heavy weaponry. Assad was staging air attacks on military members attempting to escape by tanks.
BUFFER ZONE TO WIDEN: This period of time, which may be extensive and extremely trying will slowly but surely weaken the Syrian military causing a divide. The buffer zone is expected to be expanded and reverse attacks may be staged from this region. The zone is anticipated to encompass Aleppo in time and the city is expected to become the symbolic region of the struggle, just as Benghazi was in Libya.

Ankara's three conditions
Ankara has granted permission for the Syrian opposition to establish a representative office in Turkey under the condition that they first unify amongst themselves. Ankara has also set up certain conditions for the no flight zone to be established with Turkey's support. These conditions were relayed to the eight members of the Syrian National Council Foreign Affairs Davutoğlu met with previously. Turkey's conditions are as follows:
A U.N. resolution must be released in order to establish the no flight zone under international legitimacy.
The Arab League must support Turkey's stance and must act as leaders.
The EU and the USA must act as guarantors during this process and offer support.