“Syria has reached a dead end” 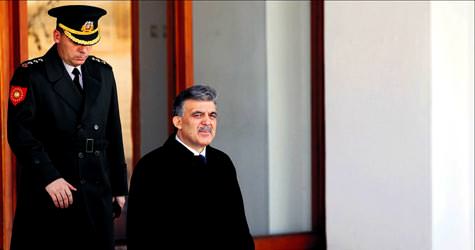 Speaking prior to his departure to England as a guest of Queen Elizabeth II, President Gül inferred that the Syrian conflict was headed for a dead end, and stated, “It appears Syria did not analyze what is going on well nor did they pursue a realistic policy.”

President Abdullah Gül referred to the conflict in Syria as headed for a dead end during a press conference held at Ankara's Esenboğa airport prior to his departure for a four-day trip to England as the guest of Queen Elizabeth II.
During the press conference, Gül stated the following in response to a question on Syria:
'UNREALISTIC POLICY'
"Sadly, things in Syria have reached a dead end. Unfortunately the situation in Syria does not look bright. We never wanted Syria to see these days. That is why we shared our most sincere opinions with our Syrian comrades at every level both publicly as well as behind closed doors. It appears that Syria was unable to analyze what is going on well. As Turkey, we have always stood up to international pressure, preferring to maintain friendly relations with Syria. While Syria has become isolated, we have done just the opposite. However, now the pressure is coming from within. The Syrian public wants freedom and democracy. They are uprising in response to the oppression. What needs to be done is quite evident. Respect must be paid to the decision reached by the Arab League. As Turkey, we fully support the decisions made by the Arab League."