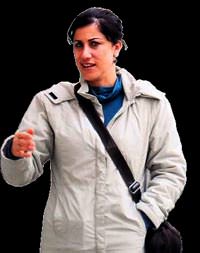 Twelve years later, SABAH has tracked down Ayfer Kaya, aka ‘Rozerin’, Abdullah Öcalan’s lover who was with him to the end of his journey which concluded with his arrest in Kenya.

SHE RESIDES WITH HER LOVER IN ITALY
Wanted with a red bulletin out on her name, Ayfer Kaya was seen in Modena, famed for its Ferrari's, with her new lover from the PKK. Ayfer Kaya, whom has been known to have been conducting business in connection to the PKK for a long time now, is operating a doner chain in Modena.
SHE HAS HAD A NOSE JOB
Despite being wanted by Italy with a red bulletin, there has been no processing on her name. It is claimed Ayfer Kaya is being protected by Italy's Secret Service. Known by the code name 'Rozerin', Ayfer Kaya appears to have gained a little weight and has undergone plastic surgery.
HER NAME IN MODENA IS 'ROZA'
According to information obtained, Kaya directs the PKK's capital in Italy and filters her revenue from the restaurant to the terrorist organization. Also known as Öcalan's black box in Europe, Ayfer Kaya speaks six languages and goes by the name 'Roza'.in Italy.
SHE HAS BEEN LIVING IN ITALY FOR YEARS WITH A GREEK PASSPORT
Claimed to have deep connections, similar to Ocalan's wife Kesire Öcalan, Ayfer Kaya has been living in Italy with a Greek passport said to have been obtained by her Greek NGO worker friend Golfo Gourna.
HER AND HER PKK LOVER
Tracked down in Modena in another milestone journalistic effort by SABAH, Ayfer Kaya and her lover Mehmet Can Altunbaş were shocked when faced with SABAH journalist Abdurrahman Şimşek's questions and refused to comment.