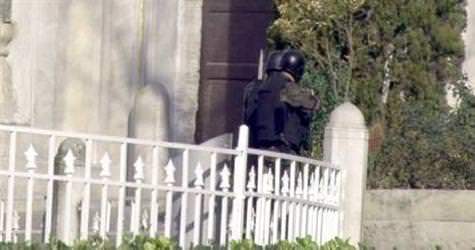 Turkish security forces killed a Libyan gunman who shot and wounded two people with a pump-action rifle in the courtyard of Istanbul's historic Topkapi Palace on Wednesday, Turkish officials said.

The assailant opened fire around the time the first visitors would normally be arriving at the lavish palace, home of Ottoman sultans for centuries and one of Istanbul's top tourist draws. He was killed after a one-hour siege.

"The attacker was not a Turkish citizen, he was foreign. A Libyan national born in 1975. He entered Turkey on November 27," Interior Minister Idris Naim Sahin told reporters.

He said police had identified the vehicle in which the attacker arrived at the scene.

"The vehicle had a Syrian number plate. Its owner is someone else. But according to initial information the link between them is not very clear," he said.

Investigations were continuing, he said.

Turkey imposed sanctions on Syria on Wednesday, joining the Arab League in isolating President Bashar al-Assad over his military crackdown on opponents.

Istanbul Governor Huseyin Avni Mutlu told reporters the gunman had been shot after refusing to surrender. He declined to comment on a possible motive for the attack.

A coach party was disembarking to enter the gates, which had just been opened, when shooting was heard inside.

Witnesses said the gunman shouted in Arabic "Allahu Akbar" (God is greatest) as he opened fire.

"He walked by me, past the fountain, towards the palace. I said: 'are you a hunter?' He said 'Allahu Akbar' and some things in Arabic I didn't understand. Around 20 seconds later the sound of gunshots started," one unidentified witness stated.

Several ambulances had rushed to the scene, where a police cordon was set up and people were evacuated. Armed security service officers had taken up positions on the palace walls.

A soldier and a private security guard were wounded in the attack.