Running the country from home 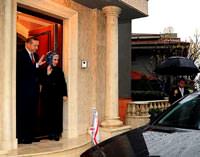 Prime Minister Tayyip Erdoğan has cancelled a trip to Qatar this week to spend more time recovering at home from an operation, his office said on Wednesday.

Erdoğan, 57, underwent abdominal surgery on Nov. 26 and has been resting and out of the public eye since then.
His absence - which has led to the cancellation of two consecutive cabinet meetings despite there being four deputy prime ministers - has caused some commentators to reflect on what void Erdoğan would leave if anything happened to him. Having led Turkey for the past decade, Erdogan dominates the political landscape, and all key decisions rest with him.
The prime minister's office has said Erdoğan is in good health and has released photographs of him smiling and meeting with visiting Qatari ruler Sheikh Hamad bin Khalifa al-Thani on
Wednesday and with U.S. Vice President Joe Biden on Saturday.
Biden, who was with Erdoğan for two hours, told reporters: "He looked to me good, his stamina was real."
Biden also said that Erdoğan thought he was going back to work "relatively soon".
Erdogan, one of the most popular leaders among Arabs, had been scheduled to visit Qatar on Dec. 10-12.
Turkey's usually sensitive markets have showed little reaction to Erdoğan's health issue, being more perturbed by the global economy.