All Hopa arrests freed on bail 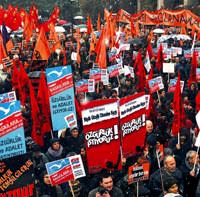 Twenty-two Turks charged with terrorism offences after being arrested at an anti-government protest have been freed on bail after six months in jail.

Police arrested 28 people in June at an Ankara protest against the death of a retired teacher who suffered a heart attack when police fired pepper spray at a demonstration in the Black Sea town of Hopa a few days before. Police raided their houses and found left-wing tracts and pictures of executed Turkish leftists. Prosecutors charged 22 of them, including 14 students, with crimes ranging from "membership of a terrorist organisation", to "committing crimes in the name of a terrorist organisation", crimes that could carry a sentence of up to 45 years in jail.
Hundreds of protesters gathered outside the Ankara court on Friday for the first hearing of their case after the accused had spent nearly six months in jail. But after a 12-hour hearing the judge ordered the 22 freed on bail.