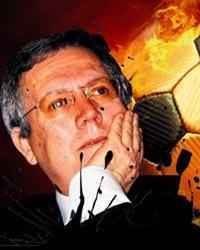 The courts accepted the indictment on Friday charging 93 soccer officials and players, including the chairman of champions Fenerbahçe, with match-fixing in a case which has sent shockwaves through the league.

Attention will now turn to the reaction of the Turkish Football Federation (TFF) and European football's ruling body UEFA. Under sanctions so far, the TFF barred Fenerbahçe from this season's Champions League over the allegations.
Istanbul prosecutor Fikret Seçen said a court in the city had accepted the indictment on Friday. Turkish broadcasters obtained copies of the indictment and said the first hearing in the case would be on Feb. 14. Thirty-one players and officials, including Fenerbahçe chairman Aziz Yıldırım, have been jailed pending trial since the scandal first emerged in July. Also among the defendants is a TFF deputy chairman, Göksel Gümüşdağ. Olgun Peker, an ex-president of club Giresunspor, and Yıldırım are accused of being gang leaders among a raft of charges ranging from match-fixing to the payment of bribes. The indictment names eight clubs, including Fenerbahçe, Beşiktaş and Trabzonspor, who are currently in the Europa League after replacing Fenerbahçe in this season's Champions League
Fourteen players are among the defendants. TFF Chairman Mehmet Ali Aydınlar said the federation would act soon on individuals involved in the case but would not take any action against clubs until the end of the season. "We want to reach decisions on individuals as soon as possible. But we will make our decision on clubs at the end of the season," he told reporters.
REDUCED PENALTIES
However, the course of the case has been complicated by legal reforms being carried out in the capital Ankara, where MPs are pushing through an amended law which severely cuts jail sentences for match-fixing. The reform has attracted controversy as it coincides with the investigation and amends a match-rigging law which came into effect only in April, having been pushing through parliament at the request of the soccer clubs themselves.
On Friday, President Abdullah Gül vetoed the amended legislation which reduces jail sentences for individual cases of match-fixing to a maximum three years from 12 years under the original legislation. Gül argued that the reduced penalties would not constitute a sufficient deterrent and expressed concern about the public impression that the amendment of the law was designed to benefit certain individuals. Parliament is standing by its amendment and is set to send the law back to Gül unchanged, requiring him to pass the legislation. If that happens, a new indictment may have to be prepared in the match-fixing case on account of the lesser sentences. The investigation alleged manipulation in 19 matches, including Fenerbahce's 4-3 victory over Sivasspor which won the league championship on the final day of last season. Galatasaray, not mentioned in the indictment, lead the domestic league this season, ahead of Fenerbahçe and Beşiktaş
Sanctions against clubs could include relegation. Last term's cup final between Beşiktaş and IBB is another match under investigation.