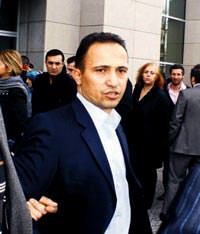 A Turkish policeman was found guilty on Tuesday of the involuntary manslaughter of a Nigerian asylum-seeker in police custody more than four years ago.

The Istanbul court sentenced Cengiz Yildiz to four years and two months in prison. Yildiz would have faced a life sentence if found guilty of murdering Okey, one of thousands of African refugees living in Turkey's biggest city Istanbul. Stenciled portraits in memory of the slain Nigerian are still spray-painted on some streets and alleys of Istanbul.

He was taken into custody on charges of drugs possession and died from a gunshot wound at the central Beyoglu station in August 2007. The bullet was fired from Yildiz's gun while Okey was being questioned in what the officer said was an accident. The case was complicated by the absence of security camera footage and by the disappearance of the shirt which Okey was wearing at the time.