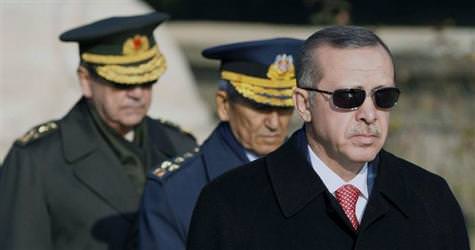 After recovering from surgery in his Istanbul home, Prime Minister Tayyip Erdoğan returned to Ankara 21 days after his November 23rd departure. Erdoğan was greeted by enthusiastic crowds upon his arrival to the Esenboğa Airport. Erdoğan departed at 21:15 last night to fly to Ankara by ANA aircraft and arrived to the capital at 22:10.

GREETED WITH SIGNS
The crowd awaiting the Prime Minister's arrival, held up signs that read, "Get better great Master", "Don't look with an evil eye, there is just one of him" and together they sang the popular song, "Bir şarkısın sen ömür boyu sürecek" (You are a song that will be sung forever).
Once the plane carrying the Prime Minister touched down, the crowd began chanting slogans of support for Erdoğan. When he arrived, Prime Minister Erdoğan and his wife Emine Erdoğan waved to the crowd from the VIP Lounge door. A number of ministers were also on hand to welcome the Prime Minister and his accompanying party to the capital. Hundreds of taxis also flocked to the airport to welcome the Prime Minister and established a lengthy convoy along the premier's route. The taxi drivers held up Turkish flags and played the traditional drums and horns as he passed. Meanwhile, the Prime Minister's convoy slowed as they passed the lined up taxis and Erdoğan greeted them. Erdoğan was accompanied by a long convoy that led him to the residence at the Keçiören Subayevleri.
A GESTURE IN THE AIR
According to information obtained, Prime Minister Erdoğan was also greeted by a special gesture while still up in the air. While en route in the ANA aircraft, the other planes in the air offered 'get well' messages to the premier through the air control tower. The other pilots requested the ANA pilot relay their messages of 'welcoming' the premier to the capital and their wishes for his speedy recovery. The Prime Minister will be chairing a Supreme Military Council today and tomorrow will head a Council of Ministers meeting.