Sooner or later, Assad will be overthrown 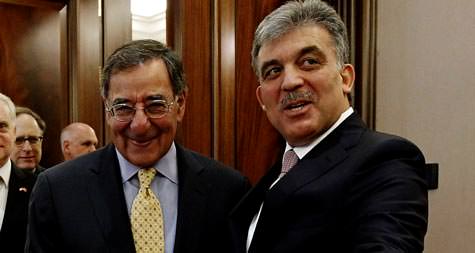 After the modest ceremony which marked the end to eight years of war in Iraq, U.S. Secretary of Defense Leon Panetta arrived to Ankara where he announced that he could no longer remain an observer to Syria’s killing of its own citizens.

From Ankara, Panetta called on Syrian leader Bashar al-Assad to resign. After meeting with President Abdullah Gül, United States Secretary of Defense Leon Panetta answered questions for a group of journalists. Mentioning that both he and President Gül discussed the situation in the region, Panetta stated that it was time that Bashar Assad stepped down as President of Syria. Panetta also mentioned that Turkey, the United States and Arab nations would continue to exert pressure on the Assad regime, while also continuing efforts to convince Russia and China on the matter. "The combined pressured exerted by the international community will definitely reap results. Assad will be overthrown sooner or later."
Panetta was extremely cautious regarding commenting on Iran. When asked, "Are you against military intervention in Iran?" Panetta responded, "If the president wants us to intervene, we will."
WE LEFT UNITING IRAQ
Panetta stated that they entered the war divisively however left uniting and noted that he did not believe that Iraq will be divided following the United States withdrawal.

"Our alliance with Turkey carries much importance for us," stated Panetta. "Turkey plays a significant role in the region. The Turkish public should know that America will always be at their side." Underlining that the United States will continue to provide assistance to Turkey in the fight against PKK terrorism and that they have conducted every form of initiative to do so in congress, Panetta explained that during his stay, he informed the Iraqi administration on the necessity of ending the PKK presence within the nation's borders.
After his meetings held in Turkey, Panetta made a short announcement that was released on YouTube. Panetta begins his announcement by saying 'Merhaba' in Turkish and went on to thank Turkey for their cooperation in hosting the NATO missile defense radar.