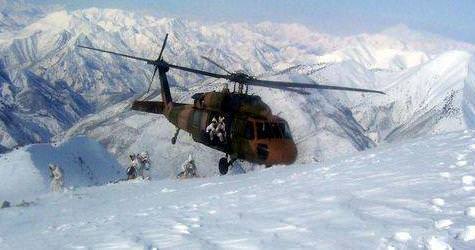 Amongst 50 PKK terrorists cornered in the terrorist organization’s winter encampment Görese Mountain hides "İrfan Amed" one of the most significant figures for the organization in Turkey. Estimations are that 20 terrorists have been killed in the operation.

The circle is closing in on 50 KK terrorists cornered in the Görese Mountains, situated between Kurşunlu in Diyarbakır's Dicle district and Elazığ's Arıcak district. The operation initiated with 5,000 soldiers, and backed by cobra helicopters has established a blockade in the PKK's winter encampment which has been going on for four days now. According to information received, the majority of combat is transpiring on the Arsek and Pirejman skirts. With snow fall in places reaching two meter's in height, terrorists are attempting to run in groups of three to five people and are mining along their escape route.

According to Diyarbakır Governor Mustafa Toprak, "It is suspected that there are 40 to 50 terrorists in the vicinity. Photographs taken from the air and information gathered from intelligence show that possibly 15-20 terrorists have been killed. The operation is being conducted with extreme care due to the potentiality of traps and mines."

The terrorists were tracked down to their location in the Görese Mountain as a result of the October demolition of their one ton worth of food supplies kept in the rural region of the Kurşunlu village. Since then, PKK terrorists have had to come in and out of villages in order to obtain supplies, where they were tracked.

PKK'S GREAT LOSS
According to data from the Ministry of the Interior, in operations that have been conducted since the July 14th Silvan raid, the PKK has had 150 members surrender. In operations, including cross-border, approximately 340 terrorists have been killed, 110 wounded and 50 captured.
'NUMBER ONE TRAPPED IN BLOCKADE'
Meanwhile, also supposedly trapped in the armed forces blockade is Mehmet Tahir Kılıç aka 'İrfan Amed' the man stated to be in charge of the terrorist organization's 'Center Field' which consists of Diyarbakır, Erzurum, Bingöl, Batman, Muş, Bitlis and Elazığ. Considered to be the most important figure for the organization in Turkey at present, the 45-year-old terrorist has been an integral part of the mountain wing for the past 22 years.