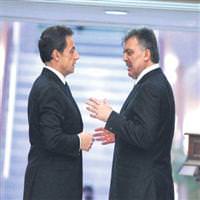 President Abdullah Gül called on France on Tuesday to drop a parliamentary bill making it illegal to deny the Armenian allegations regarding what transpired in 1915.

Tension has risen between Paris and Ankara in the last week over a draft law put forward by a member of President Nicolas Sarkozy's party to be debated in parliament on Thursday. Prime Minister Tayyip Erdoğan wrote a letter to Sarkozy last week warning political and economic relations would suffer grave consequences if the bill is passed. But it is not clear what unilateral steps Turkey, a WTO member, can take.
"We ask France to immediately give up the initiative that will bring it into a position where it is does not respect freedom of expression," Gül said in a statement. He said it was "out of the question" to accept a bill denying Turkey the possibility to defend itself against "false and baseless allegations against our country and people".
Armenia says about 1.5 million Christian Armenians were killed in what is now eastern Turkey during World War One in a deliberate policy ordered by the Ottoman government. Ankara denies the killings were directed towards Armenians and says many Muslim Turks and Kurds were also put to death as Russian troops invaded eastern Anatolia, often aided by Armenian militias.
Turkey has sent a parliamentary delegation to try to head off the bill, but as it has not been put forward by the French government, there is little that Sarkozy can do to stop it, even if he should wish to. That is also unlikely as Sarkozy, long a critic of Turkey's bid to join the European Union, warned Ankara in October that unless Turkey recognized the 1915 killings, France would consider making denial a crime. On top of that there is the consideration, which Turkish leaders have suggested is the real reason behind the bill, that there are about 500,000 French voters of Armenian descent in France and an election is due in five months time.
BRITTLE RELATIONS
The draft law proposes a one-year prison sentence and 45,000 euro ($58,500) fine for denying the Armenian allegations. France is Turkey's fifth biggest export market and the sixth biggest source of its imports. A similar diplomatic spat developed in 2001 when Paris passed a law recognizing the killings. While relations remain brittle, mainly due to Sarkozy's opposition to Turkey's EU entry, there has been little effect on trade between the two countries. The French Foreign Ministry has stressed the draft law is not a government initiative. Turkey and Armenia signed a peace accord in 2009, agreeing to set up a commission of international experts to examine the events of 1915, restore diplomatic ties and open their border to trade.