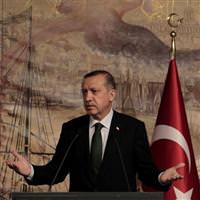 Should the French parliament pass the resolution which would make denying Armenian allegations a crime, Ankara will then announce a stage by stage sanctions package to be issued against France, Erdoğan said. "My announcement will most likely be regarding the first stage. I will announce what sort of measures we will take."
When asked to respond to Sarkozy's refusal to accept President Abdullah Gül's telephone calls, Erdoğan stated, "It is a diplomatic misfortune. Sarkozy has defined himself."
Erdoğan went on to answer the following questions:
THERE ARE JUST AS MANY TURKS AS ARMENIANS: "Sarkozy's vote calculations and steps taken at present will be to the detriment of France-Turkey relations. My earnest wish is, at present in the senate there is an evident structure of a majority of social democrats. I hope this structure will evaluate well this step that the government in power is currently taking and in addition will try to rectify this wrongdoing, which has happened before, in which case Turkey-France relations would continue in the expected manner. If in France at present there are 500,000 Armenians, then there are also 550,000 Turkish citizens.
THE FRENCH ARE ALSO REACTING: There are maybe two, maybe even three to four million people in France that share our views. And all of these people weren't even aware of this step being taken until now, however if tomorrow the decision is passed in the assembly then I think that reactions from France's citizens themselves will continue to increase.
SARKOZY HAS PORTRAYED HIMSELF: (When reminded of Sarkozy's refusal to speak to President Abdullah Gül on the phone.) That was of course a diplomatic misfortune. This sort of slip, this sort of mistake should not be made in international diplomacy. Sarkozy has defined himself."