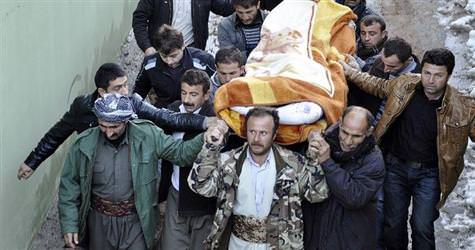 A group from Şırnak crossed the border on mules the night before last. With the military’s experience in the past, namely the Gediktepe and Dağlıca ambushes which were staged using mules loaded with weapons, they want on alarm and used F-16’s to bomb the suspected terrorists.

Upon receiving a tip that PKK terrorists planned to cross the Iraqi border in order to stage an attack, at 18:30 on Wednesday night drones deployed in the region spotted a crowded group travelling on mules approaching the Uludere border. Once the group crossing the border was detected, the information was relayed to the region command as well as to Ankara.
IT TURNS OUT THEY WERE VILLAGERS WHO WERE SMUGGLING FUEL
Once the operation was ordered, jets took off from Diyarbakir at 21:30 and bombed the group in question. Thirty-five people were killed and one wounded in the air attack which went on for one hour. Unfortunately, the group suspected to be crossing the border in order to stage a large attack, turned out to be villagers smuggling fuel.
CORPSES COLLECTED BY VILLAGERS
Villagers who received news of the incident crossed the border in the early morning hours in order to collect the bodies of their loved ones. Bodies were loaded onto mules and returned to the Ortasu and Gülyazı villages. Nineteen-year old Hacı Encü, who was injured in the attack explains, "It was 21:00 and we were approaching the border. First the whole area lit up with flares and then we began to hear sounds similar to cannon shots. We left our loads on the Iraqi side of the border and tried to cross over fast. Then there were planes and they began bombing us. We were two separate groups. No one survived form the group in front of us. The bombardment lasted for an hour. We took shelter under rocks in a riverbed. We were six people, three of us survived. We only came out when we heard villagers approach the area about two hours later." Of the 35 people killed from the air strike in Şırnak, 29 were said to be related. The villagers were smuggling fuel in barrels carried by the mules, which exploded in the attack, resulting in significant burning of the victims.
What happened in Gediktepe?
Last year's Gediktepe attack, in which terrorists thought to be smuggling villagers crossed over the border in order to stage an ambush in which 11 soldiers were killed, was influential in the military's bombing. In addition, the General Staff claims the attack took place in the terrorist organization's camp region. Prior to the Dağlıca and Aktütün attacks, terrorists had also crossed the border disguised as 'smugglers', with heavy artillery loaded on mules.