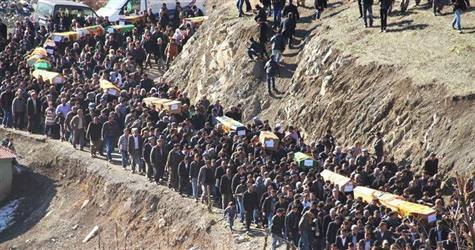 Following the death of 35 villagers in a military strike, the Government and the General Staff held a joint meeting which went on for hours as they evaluated the situation at hand. While the option of issuing an apology was debated during the meeting, the possibility of offering ‘compensation’ was also an item discussed. Yesterday, TAF published a written announcement offering condolences for those who had passed away.

Ankara has held meeting after meeting following the death of 35 civilians thought to be terrorists in an air strike staged by the Turkish Armed Forces in the Northern Iraq Sinat- Haftanin region.
While the government and the AK Party staff conducted their own internal evaluations of the situation, Chief of the General Staff General Necdet Özel held a crisis meeting with commanders. Both meetings resulted in classifying the incident as "tragic" and "saddening" and a strategy was developed during a telephone conversation between Prime Minister Erdoğan and General Özel. The AK Party administration decided to have Deputy Chairman Hüseyin Çelik release an announcement in which Çelik stated, "If there was an error, the necessary steps will be taken."
The General Staff initially announced their condolences and the TAF's grief due to the incident. The option of issuing an "apology" statement was also laid to the table. After the AK Party and the General Staff released their announcements, Prime Minister Erdoğan also followed up with a series of messages. In reference to those attempting to divert the incident, Erdoğan stated, "this is an unfortunate, saddening development." Ankara also debated the option of offering compensation to the families of those who passed in the strike.
Details of the intense past 48 hours in the capital:
AK PARTY TAKES THE FIRST STEP
* As soon as the incident unraveled in which it was realized that civilians had been hit the first step taken was by Prime Minister Erdoğan who received a briefing from Chief of General Staff General Özel and the National Intelligence Agency (MİT). Erdoğan later met with Deputy Prime Minister Beşir Atalay and Minister of the Interior İdris Naim Şahin. The issue was also discussed at a meeting held by the AK Party Central Decision Administrative Board (MKYK). During this meeting, the options of issuing an "apology" or "compensation" were discussed. Following the meeting, Deputy Chairman Hüseyin Çelik made an announcement on behalf of the AK Party. Çelik stated, "Turkey is a state governed by the rule of law. If mistakes were made, then the state's rule of law will determine it is so and whatever necessary will be done."
* While the AK Party released a statement, General Özel was holding a meeting with commanders. According to the information obtained, during the meeting, General Özel stated that they will be "transparent" to the public and will not offer the possibility to be "exploited". During the meetings, it was decided that the TAF first and foremost release a message of condolences.
* The General Staff held a final evaluation on the issue yesterday morning which they followed up with the release of a message of condolences for the 35 lives lost. The announcement published on the General Staff website read, "We offer condolences to the close relatives of those citizens whose lives were lost in the cross-border incident which transpired on the evening of December 28th, 2011."
* In both the AK Party's and the General Staff's evaluations of the incident, the option of issuing an "apology" and "compensation" were discussed. Certain members of the AK Party's MKYK expressed the viewpoint that "condolences are not sufficient for this incident and an apology is necessary." In regards to the issue of offering an "apology" and "compensation", the General Staff headquarters held the view that first "the investigation should be completed and a conclusion reached on the legal aspects of the incident."
MEETING AT THE GENERAL STAFF HEADQUARTERS
* The General Staff referred to the incident as a "saddening situation". The intelligence compiled prior to the attack was also assessed. Within this framework, the situation preceding the operation, the orders for the operation and the operation itself were clarified. After the incident transpired, information was requested from the 12 command centers involved, including the Diyarbakır 2. Air Force Command, the Van Gendarmerie Public Order Army Corps and the 7th Army Corps Command, the Şırnak 23rd Border Division Command, the Uludere 4th Border Troop Command and the Batman Unmanned Aviation Base Command.
* The issue of taking psychological preventative measures in order to ensure the incident does not provoke a negative effect on the struggle against terrorism was brought up. Within this framework, the decision was reached to evaluate every aspect of the incident with all of the commands involved in the struggle against terrorism. The three-day of mourning announcement made by the BDP as well as certain announcements that the PKK "had no terrorists" in the region, made by certain individuals including Fehman Hüseyin, an important figure for the PKK was classified as "exploitation". It was decided that being translucent in regards to the incident would prevent any further exploitation.
* Twenty-nine of the 35 killed were identified as being members of the Goyan clan, which have served as village guards. In order to prevent attempts by the PKK terrorist organization to exploit this family, commanders in the region have been ordered to speak to a number of the family's prominent members. Accordingly, it has been relayed that commanders met with prominent members of the family and offered their condolences. In addition, within the framework of evaluations made with the government, district officials and civil society organizations will also take measures in order to prevent the incident from being exploited.