First guest of the year 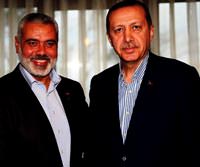 On the first day of the year, Prime Minister Recep Tayyip Erdoğan welcomed Ismail Haniyeh, Prime Minister of the Palestinian National Authority based in Gaza, to his home in Istanbul.

During the meeting, the noteworthy progression of union negotiations between Al Fatah and Hamas was discussed.
According to the information obtained, Erdoğan expressed to Haniyeh his wish for compromise to be reached amongst all of the Palestinian political groups in which they could come together under the same roof and strongly represent Palestinian democracy.
During the two hours and 35 minutes-long meeting between committees as well as Haniyeh and Erdoğan's one-on-one discussion, the hope that efforts to establish the restructuring of the Palestine Liberation Organization Temporary Leadership would be completed as soon as possible was brought up. Erdoğan also expressed to Haniyeh his wish for compromise to be reached amongst all of the Palestinian political groups and for their comprehensive organization and strong democratic representation of the Palestinian public be conducted under the same roof.
Turkey is the last stop for Prime Minister of the Palestinian National Authority in Gaza Haniyeh, who was on a tour of a series of countries in the region. Today, Haniyeh will pay a visit to the Mavi Marmara ship, where a deadly raid was staged by Israeli forces as well as the Humanitarian Aid Foundation (İHH), one of the organizers of the aid flotilla that was destined for Gaza. There he will meet with the families of those whose lives were lost on the ship as well as with others who were also on board at the time of the raid. Haniyeh will also hold a press conference in which he will share his views on related developments.
An Uludere summit with Özel
Prime Minister Erdoğan meets with Chief of General Staff General Necdet Özel today in order to discuss the bombing on the Iraq border, which resulted in the loss of 35 civilians' lives. Prime Ministry sources state the meeting will take place at the Prime Ministry New Building at 13:00 and will be held within the format of an ordinary weekly meeting. Reminding that Erdoğan and Özel have not held a weekly meeting in almost one and a half months, sources state that there are issues that have built up and are needed to be discussed, and due to the incidents which transpired in Uludere a meeting has been scheduled.