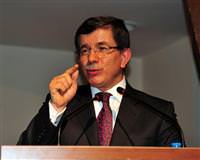 Foreign minister Davutoğlu will visit Tehran on Wednesday for talks with his Iranian counterpart on Iran's nuclear program and developments in neighboring Iraq and Syria, the Turkish Foreign Ministry said late on Tuesday.

Ahmet Davutoğlu's visit was described as being in the framework of regular talks between the two ministers, but it comes at a key time for the region and relations between the two regional powers.
"It is intended that they will exchange views on topical subjects such as Iran's nuclear program and developments in Syria and Iraq," the Turkish foreign ministry said.
Davutoğlu's visit was set to finish on Thursday.
Turkey is evaluating whether to seek a waiver from the United States to exempt Turkish oil importer Tupraş from new U.S. sanctions on institutions that deal with Iran's central bank, a Turkish official said on Tuesday.
U.S. ally Turkey is among the biggest buyers of Iranian oil and gas. It gets about 30 percent of its oil from neighbour Iran, and Tupraş, Turkey's biggest crude oil importer is a big buyer of Iranian crude.
The United States has armed itself with tough measures targeting financial institutions that deal with Iran's central bank, the main clearinghouse through which OPEC's No. 2 oil exporter deals with clients around the world.
The law, signed by President Barack Obama on Saturday, allows the U.S. to exempt institutions in a country that has significantly reduced its dealings with Iran. Obama may also grant waivers deemed to be in the U.S. national interest or otherwise necessary for energy market stability.
Turkey is bound by U.N. sanctions against Iran, though it opposed the last round of measures in 2010, and it insists it is not obliged to follow non-U.N. sanctions.
Iran threatened on Tuesday to take action if the U.S. Navy moves an aircraft carrier into the Gulf, Tehran's most aggressive statement yet after weeks of sabre-rattling as new U.S. and EU financial sanctions take a toll on its economy.