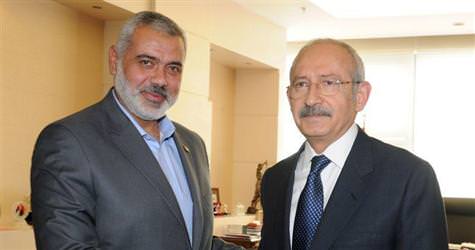 Having been in Turkey for the past two days, Gaza’s Palestinian Administration Prime Minister Ismail Haniyeh literally did the rounds in Ankara yesterday after arriving from Istanbul.

Yesterday morning Haniyeh paid a visit to the AK Party General Headquarters, where he was welcomed by AK Party Deputy Chairman Ömer Çelik. Haniyeh's second stop was to pay a visit to CHP.
"We appreciate CHP's support"
Meeting with Republican People's Party or CHP leader Kemal Kılıçdaroğlu, Haniyeh extended an invitation for Kılıçdaroğlu to visit Gaza and stated. "When Arafat was under siege the sole foreign affairs minister who visited us was İsmail Cem, we do not forget that." During the 45 minute meeting, Haniyeh told Kılıçdaroğlu, "We have strengthened our ties with the PLO; bottom line is we are children from the same home." The Hamas leader went on to state to the CHP Chairman, "Your support is greatly appreciated." While Haniyeh extended an invitation to Kılıçdaroğlu to visit Gaza, he was also noted to have stated, "I have just met you, however it is as if I have known you for 30 years."
Kılıçdaroğlu offered CHP's support to the Palestinian cause and stated, "The agreement reached between the PLO and Hamas will contribute to peace in the Middle East, which pleases us greatly."
HANIYEH ALSO VISITS BDP, MHP
Haniyeh met with Nationalist Movement Party or MHP leader Devlet Bahçeli for approximately half an hour. Bahçeli told the Hamas leader that they would continue to offer their support to Palestine.
During Haniyeh's visit with the Peace and Democracy Party or BDP, Chairman Selahattin Demirtaş made the comment, "Us Kurds have been fighting for democracy and freedom for many years now. We understand the Palestinian people best."
Haniyeh also joined the AK Party's Assembly Group meeting held at the Parliament. As soon as Haniyeh entered the hall, Erdoğan stopped his address and applauded Haniyeh who then approached the pulpit and greeted the party members hand in hand with Erdoğan.
While Prime Minister Erdoğan thanked Haniyeh for attending the group meeting in Arabic by stating 'shukran', he later moved on to his office where he hosted the visiting leader for a meeting which lasted approximately half an hour.