A general arrested: what do Turkey’s intellectuals think? 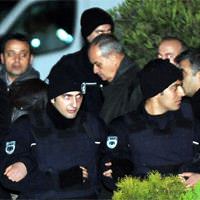 The overnight arrest of the 26th Chief of General Staff General İlker Başbuğ marks a democratic first for Turkey. The general faces charges due to his involvement in a plot intending to topple the democratically-elected government.

Some of Turkey's most significant editorialists have commented on last night's development in applause, surprise, criticism and praise.


- HASAN CELAL GÜZEL (Sabah Newspaper Columnist): "The judiciary for the first time is fulfilling the requirements of an independent and democratic state governed by the rule of law."

"İlker Başbuğ had referred to the 'Internet Memorandum' document, containing a wet signature as simply a piece of paper. Now, it is that 'piece of paper' that has led to his arrest.
It is saddening that a leading figure from the Turkish Armed Forces has been arrested. However in the past, never mind even arresting a general, one couldn't even criticize such a figure. This is the first time the judiciary is fulfilling the requirements of an independent and democratic state governed by the rule of law.
The "internet Memorandum' may indeed have been conducted by him. At the very least, it was obvious he was aware of the incident. I find his arrest to be completely normal.
We know he has called a flame thrower a piece of pipe in the past, and referred to the wet signature as a piece of paper. He was trying to degrade the situation.
I would also recommend that Yaşar Büyükanıt be taken to court and arrested.
Turkey must be saved from these militarist disgraces.
Even though Kenan Evren is now elderly and we do not want him to suffer, we do want him to face punishment. Why are we bothering to charge him if he is only going to be set free anyways?
Well, that is because if a general who stages a coup and his officers could have been tried in the past, none of these developments would be transpiring now in Turkey.
Even if it is late, I feel these developments are extremely important for the welfare of the state."

"Turkey has entered a road where it needs to go the distance. You can't just look at this incident as; "this much was done, everyone learned their lesson, let's stop."
If we look at the entire process, there were a number of writers who wrote in the media that the documents in question were fake fabrications.
For me, the moment in which İlker Başbuğ made a grave mistake, was when he called the 'Internet Memorandum' and the document containing a wet signature a "piece of paper". In fact, this incident in itself creates a unique photograph for Turkey's democratization.
However these types of cases need not be perceived as the "toppling of a throne". This is a very important step from a Turkish legal perspective."

- MAHMUT ÖVÜR (Sabah Newspaper Columnist): "A taboo has been broken, this change must continue."

"This process will continue with the September 12th trials. As Turkey places priority on dealing with its hot history, the February 28th period, and the author of the e-memorandum Yaşar Büyükanıt will also be brought to the agenda.
The military structure is one thing and the political structure is another. To disassociate the two does not equate to weakening the military. I feel that politics will come to an end when the chiefs of the general staff no longer express their viewpoints on political developments.
Look, the 'Internet Memorandum' period began in 2009; it has taken nearly three years to achieve this result. However, Turkey has reached a significant point. Turkey is witnessing the arrest of the 26th General Staff Chief. The 'Internet Memorandum' incident is an especially concrete one. Having referred to a document containing a wet signature as a 'piece of paper' and a flame thrower a 'piece of pipe', the Başbuğ incident is one which is the path towards shedding light on Turkey's dark history. A position which for years was untouchable has finally been touched. The General Staff should be connected to the Ministry of National Defense. Turkey needs to surpass its mentality issue rather than that of courage."

- MUSTAFA AKYOL (Star Newspaper Columnist): "He should be released by the court pending trial and given a digital ankle-cuff."

"What matters here is conducting austerity when it comes to arrests. I believe that there are extensive numbers of arrests and detainees being held pending trial and believe that some defendants could be released with the use of electronic ankle cuffs as they await their trial. Especially when it comes to someone such as İlker Başbuğ, he is a person who should be released pending his trial, as he is well-known, will not run and has no chance of tampering with evidence."

- FİKRET BİLA (Milliyet Newspaper Ankara Representative): "I would have hoped that the court would have chosen to release him pending trial."

"He should have been released pending trial. There is no way he could tamper with the evidence as this has been a case that has been going on for months now, However it appears the judge did not feel this way. Of course when it comes to the chief of the general staff, there is symbolic meaning involved.
To charge the top member of the armed forces with forming a terrorist organization is a significant accusation. In my opinion, it would have been appropriate to take the route of releasing the defendant pending trial; however the judge's ruling went another way.
I spoke with Chief of General Staff Necdet Özel and he expressed that because the periods of time in which detainees are held are extensive, they will be trying to initiate a strategy which would shorten periods of detainment.
When it comes to the talk which has surfaced that "two armed forces commanders will resign should Başbuğ be arrested" well there is no such prevision and it appears that this possibility no longer exists at the moment.
As for this ruling for arrest, there will be significant echoes from all angles throughout Turkey."

- NURİ ELİBOL (Türkiye Newspaper Columnist): "Turkey is normalizing."
"Turkey has made significant strides in civilian-military relations. Therefore, this was a first for Turkey. You couldn't even express such a thing in the past.
Of course, if only the armed forces had focused on their duty to protest the nation and to use all of their power to fight against terrorism then maybe there would never have been such allegations. I am saddened however; and am also against anyone receiving preferential treatment because of a badge or their position.
The nation is normalizing and questioning the mistakes made in the past. Other testimonies may be requested and others may be remanded in custody. However, I would like to underline, that those who are inside in connection to the 'Internet Memorandum' case and whose sole crime was to fulfill the orders handed down to them should have their cases reevaluated.
The one who issued the order needs to be held responsible, because the other people are innocent. They were simply obliged to fulfill orders to the risk of their own lives, as the practice dictates. Even if they don't want to, don't like to and don't embrace it…"