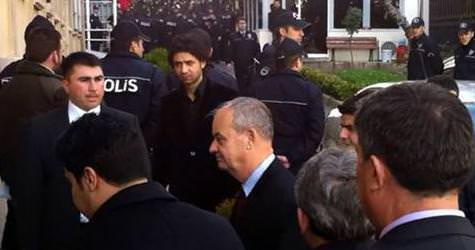 After facing questioning in an investigation initiated by the chief public prosecutor’s office, former Chief of the General Staff retired General İlker Başbuğ was referred to the night court with a prosecutor request for his arrest. Başbuğ is being charged with ordering anti-propaganda be conducted in an internet campaign staged against a democratically elected government as well as for plotting to stage a coup.

After testifying today at the Istanbul Courthouse in connection to the 'Internet Memorandum' case, former Chief of General Staff İlker Başbuğ was referred to the court on duty with a request by the prosecutor for him to be remanded in custody for plotting to stage a coup and for directing an organization aiming to discredit the democratically elected government. The court ruled in favor of the prosecutor's arrest and Başbuğ was arrested overnight.
The 13th Istanbul High Criminal Court had ruled to bring İlker Başbuğ, whose name had surfaced in testimonies and documents, in for questioning with a criminal complaint written to the Istanbul Chief Public Prosecutor's Office. In line with the court's ruling, the Istanbul Chief Public Prosecutor's Office initiated an investigation into Başbuğ's involvement in the 'Internet Memorandum' case.
WHAT HAPPENED YESTERDAY?
Başbuğ was called to testify as a suspect in an investigation initiated by Prosecutor Cihan Kansız, who is overseeing the Ergenekon investigation. Başbuğ departed the Fenerbahçe Officer's Club to arrive at the Istanbul Courthouse in Beşiktaş to testify. İlker Başbuğ arrived to the court at around 13:30 Thursday, where he shook the hand of the official who greeted him and then smiled to the press as he entered the courthouse. Under intensive security measures, Başbuğ entered the Courthouse through the entrance used by judges and prosecutors.


Defendants in the 'Internet Memorandum' case had pointed to Başbuğ as the chain of command in the formation of the internet websites in question. Başbuğ testified to prosecutor Cihan Kansız, who was accompanied by Deputy Chief Public Prosecutor Fikret Seçen during the questioning, which lasted several hours followed by the prosecutor's request Başbuğ be referred to the night court which ruled affirmatively.

Suspects in the 'Internet Memorandum' case, Deputy Chief of General Staff Hasan Iğsız, Lieutenant General Mehmet Eröz and Captain Murat Uslukılıç testified that the websites in question were set up and operated under the knowledge of General Başbuğ. Eröz stated that it was the Chief of General Staff at the time who ordered the websites be set up. A document from April 1st, 2009 details that the order came down from the Chief of General Staff's chain of command. Başbuğ served as Chief of General Staff from August 28th, 2008 to August 27th, 2010.
Başbuğ told the court on Thursday he rejected the allegations, describing the Turkish Armed Forces as one of the most powerful in the world. "We can say it is really tragicomic to accuse somebody who commands such an army of forming and directing a terrorist group," he was quoted as saying.
After a health check he was set to be taken to prison to spend a first night behind bars -- a first for a former head of the military.