Turkey’s Intelligence: “We have established an original new structure’ 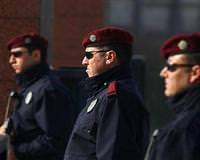 Turkey’s National Intelligence Organization (MİT) is setting up an Electronic Intelligence Village on a 3,000 square meter plot of land, which will allow for the tracking of all forms of intelligence signals.

MİT Undersecretary Hakan Fidan explains that within the next two to three years, they aim to become one of the largest intelligence services in the world and that they are synthesizing the CIA-FBI model.
Yesterday, the "Meeting with the Press" portion of a series of ceremonies held to commemorate to 85th anniversary of the National Intelligence Organization, or MİTs founding, was held at the undersecretariat headquarters.
At the event, which brought together the executive editors and Ankara representatives from newspapers and television stations, MİT Undersecretary Hakan Fidan, announced their objective to become one of the top ten intelligence services, to undergo a restructuring in terms of both internal and foreign intelligence and that they are synthesizing the United States' CIA-FBI model. Fidan stood up for the organization, which has faced intentions of being drawn into the Uludere incident, by sharing their goals for "Perfection and Competitive Pursuit."
OBJECTIVE TO BECOME TOP TEN: "We have always been told "You are very good in your region, Turkey is a shining star." However, we do not consider this to be enough. With the exception of a few countries in this region, this is not an area where there are first class players. We want to become players in the global realm. There are ten intelligence services in this realm, within the next two to three years; we will become one of them."
FIGHT AGAINST TERRORISM: "We are preparing a joint intelligence program. Under the headline "Security Intelligence", we have reestablished our units dealing with terrorism doth domestically and abroad. We have created units that will primarily deal with armed terror as well as an analysis unit that will also be dealing with terrorism."

INTELLIGENCE VILLAGE: "The General Staff Electronic Systems Command has been handed over to the MİT. A 3,000 square meter plot of land was purchased next to the Electronic Systems Command (GES) facility.
We are building an Electronic Intelligence Village there that will be befitting of the 21st century. 21. This is a historical step in terms of military-civilian collaboration. Turkey has now been saved from the wasted resources and effort as well as from duplication and has obtained the opportunity to visualize our national capacity. All signal intelligence directed towards our region will be tracked and evaluated from here."
UNMANNED AERIAL VEHICLE VISUALS ARE NOT OURS: "The visual intelligence obtained from Unmanned Aerial Vehicles is obtained by the General Staff and not MİT."

A REMINDER OF AUTHORIZATION: "In Turkey, telephone tapping is conducted through a court ruling. In the west, bureaucrats and ministers are able to do it by their own hands. There is a special authority court for CIA requests. The authorization granted to intelligence services in democratic nations are more than ours. However, I am not trying to deliver any sort of message to anyone on this issue. According to the development of conditions, there may be new evaluations on political authority."
1,000 TV CHANNELS ARE MONITORING: "Intelligence is also developing through open resource systems.
The number of foreign correspondents working for international news agencies is more than the number of foreign agents working for even the largest of intelligence organizations. Today, there is an explosion of information being realized. What is important is for this information to be analyzed. We have a system in which broadcasts from almost a thousand television stations are collected in space from where it arrives to the organization and is distributed to the various related departments."
MEETING WITH THE PKK: Fidan answered a number of questions posed to him. When reminded of a meeting with terrorist organization leaders, Fidan stated, "There were situations where we stated that if the following was known, then society would be able to comprehend it easier. It is as if I have nothing to say in this position. However, there is a copied, pasted and edited text."
SECURITY CLEARANCE: Fidan refrained from answering questions regarding relations with MOSSAD as well as having to do with the death of MİT member Kaşif Kozinoğlu in Silivri. In response to a question regarding security clearances, Fidan stated, "It is no longer in fashion in personnel hires, we do not go into security or threat identification."
'AN UNTIMELY MOVE, IS NOT A MOVE'
During the meeting, the intelligence world was depicted through the metaphor of a chess board. "When the pieces in chess are set up side by side, no one knows who is going to win. An untimely move is not a move."
Journalists expressed a lot of interest in the MİT archives, the containers carrying intelligence notes displayed in the showcase, the listening and tracking devices obtained by foreign missions, cameras and crypto equipment.
The most interesting document was the, "Journal of Individuals Tracked".
The journalists were gifted a candy dish.
INTELLIGENCE WAS NOT FROM US
An informative note distributed following Fidan's announcements stated that the National Intelligence Organization did not share any form of information in regards to a potential group, any places, dates, numbers or routes in relation to the Uludere incident.
The note, which drew attention to one journalist's continued allegations directed at MİT, noted the following: "The aforementioned journalist's December 30th, 2011 article with the headline, "Incorrect Intelligence from MİT", which states, 'A heron recorded footage of civilians in the region and relayed it to Ankara. An official in Ankara who saw the footage was suspicious of the situation. He considers the possibility that they are civilians and contacts MİT twice. MİT informs that, 'the group is definitely PKK' and relays to the headquarters that the intelligence received is 'robust.' Having been told the information is 'accurate', the planes began bombing under orders by the Air Force command … The reason for the three hour span between the time the 'accurate statement' was made and the 'visuals obtained' is due to the official who had suspicions and contacted MİT twice and waited for the information to be confirmed." This sort of explanation is a complete lie and figment of the imagination and has absolutely no connection to reality."

FİDAN: MY LIFE HAS CHANGED
Hakan Fidan talked about the ways in which his life has changed since becoming the Undersecretary for MİT.
"There is no such thing as a social life. Relaxing with friends or going to the movies, the theater or restaurants is no longer possible. The boxes are separate, the manner of flying is separate, and it is an isolated life. I work 16 to 17 hours. There is no such thing as a Saturday or Sunday. The telephone is always at an arm's length. We also have a code system at home. I stay on a campus anyways. They are present when they take me and present when they bring me back. It is this sort of life. I have progressed significantly in terms of reading books. Sometimes the thought, "Have we missed anything?" pops up in my dreams. Skipping over any point could be significant in terms of the entire nation's security."