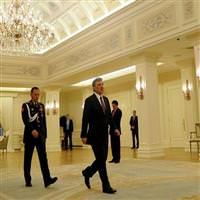 A Turkish parliamentary commission recommended on Tuesday that President Abdullah Gül’s term should expire in 2014, in a move to end confusion over the duration of his term.

Gül was elected president in 2007, but there had been doubt over whether his term would last for five
or seven years. Parliament still has to ratify the recommendation by its constitutional commission. The parliamentary commission recommends the seven-year term only applies to the current presidency, and thereafter the term should be five years.
The confusion over the length of Gül's presidency stemmed from changes to the constitution made after he was elected by parliament in 2007. Gül had been elected for a one-time seven-year term as president, though there were already proposals, subsequently passed in a referendum, that the presidency should be for five years for a maximum two terms.
In the future, Turkey's president will be elected by the people, instead of the parliament.