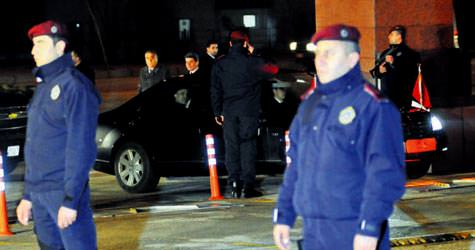 The state’s senior officials gathered at a reception held in honor of the anniversary of the founding of Turkey’s National Intelligence Organization, or MİT. Following the reception, a surprise summit was held for an elite few.

The MİT hosted senior state officials for a reception held at the Yenimahalle campus to commemorate the 85th anniversary of the founding of the National Intelligence Organization. Amongst those in attendance were President Abdullah Gül, Prime Minister Tayyip Erdoğan, Chief of General Staff General Necdet Özel and a number of ministers and superior members of the judiciary. MİT Undersecretary Hakan Fidan relayed information on the organization's new structuring as well as provided details on current projects. Fidan used cinevision in a presentation which explained their recent human resources projects.

The reception, in which members of the press were not allowed to attend, lasted approximately one and a half hours and included addresses by both President Abdullah Gül and Prime Minister Tayyip Erdoğan. After MİT Undersecretary Hakan Fidan's informative presentation, Gül and Erdoğan both delivered addresses in which they expressed how pleased they were with the organization's work. According to the information obtained, during Prime Minister Erdoğan's speech, he touched upon the coordination between intelligence organizations and delivered the message, "This coordination has been extremely successful in the fight against terrorism. This coordination will increasingly continue and there will be no going back." Erdogan also supposedly paid reference to the duties and responsibilities that befalls the MİT in connection to the Intelligence Coordination Committee, and Erdoğan also alluded to the possibility that the MİT's position within this committee framework may increase further.

Following the reception held at the MİT's Yenimahalle campus, the state's senior officials held a surprise summit. President Gül was the first to depart the reception. Erdoğan, Özel, Foreign Affairs Minister Ahmet Davutoğlu and Minister of Justice Sadullah Ergin and MİT Undersecretary Fidan remained in order to hold a 'top secret' meeting. Internal Affairs Minister İdris Naim Şahin, whom had departed following the reception, later returned to take part in the surprise summit. The meeting lasted approximately two and a half hours. According to the information obtained, during the meeting a briefing was held on the MİT's confidential activities. The MİT has drawn attention with their recent efforts in human resources. Having celebrated the anniversary of the organization's founding, last week the MİT opened their doors to press and television station executives.