Turkey to supply water for the Turkish Republic of Northern Cyprus 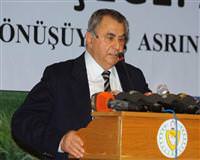 The President of the Turkish Republic of Northern Cyprus İrsen Küçük has stated that with the realization of the project, he calls “the project of the century”, in which water will be brought to the nation from Turkey, the water problem will become history.

During a press meeting held under the title, "From a Dream to Reality: The Project of the Century - The Dream is Becoming Reality," Turkish Republic of Northern Cyprus President Küçük stated, "The water that flows from our faucets today is low quality. It is not possible to be used as drinking water."

Explaining that half of the 75 million tons of water that will come from Turkey will be used as drinking water and the other half will be used in agriculture, Küçük also expressed that the Greek Cypriots will also have the opportunity to benefit from the water brought in from Turkey. The water will come from Turkey's Alaköprü Barrage and will be collected at the Geçitköy Barrage from where it will be distributed all the way to Karpaz, explains Küçük, who goes on to mention that they are planning establishing a network for drinking and utility water that will encompass the entire Turkish Republic of Northern Cyprus and at present work is being done in regards to establishing priority zones.