AK Party spokesman: “All coup perpetrators should be tried” 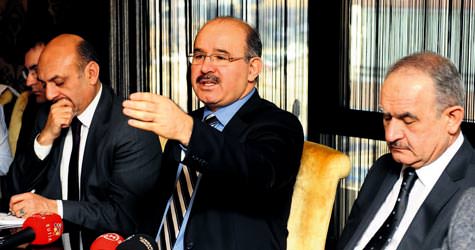 Hüseyin Çelik states, “All of those individuals who staged a coup in the past or attempted to and those who worked on preparing the infrastructure for a coup should absolutely be tried, whether or not they are on their deathbeds.”

AK Party Deputy Chairman Hüseyin Çelik held a press conference at the party's main headquarters in which he answered questions from the press. Emphasizing that all of the individuals who staged a coup in the past or whom have made attempts to should face trial, Çelik stated, "Just like how Spain, just like how Greece and just like how Chile did, all of the Pinochets' must account for what they have done."


Pointing out that the Yassıada trials constitute a page of shame in Turkey's history, Hüseyin Çelik noted that the public tried the 1960 coup, and stated, "With Cemal Gürsel at the forefront, all of the names of the perpetrators of the coup should be erased from public establishments and locations. The same should be the case for those responsible for the September 12th coup. This should also be the case for those who delivered the March 12th memorandum, for those who staged the February 28th Post Modern Coup, as well as for those responsible for the April 27th E-Memorandum."

THE TIME WILL COME FOR ALL OF THEM

Çelik stated the following: "All of those individuals who staged a coup in the past or attempted to and those who worked on preparing the infrastructure for a coup should absolutely be tried, whether or not they are on their deathbeds. This should also be done in order to make an example. From here on out any talk of a coup or any sort of memorandums need to be erased from our memories and removed from this world. Just like how Spain, just like how Greece and just like how Chile did, all of the Pinochet's must account for what they have done.
Responding to the question of whether he will apply to the courts for being an aggrieved in the April 27th E-Memorandum, Hüseyin Çelik stated, "Turkey is experiencing a progressive, step by step purification transition to full democracy. I believe that this will all come gradually and one after the other. I am amongst the aggrieved in one of these memorandums. I am in an intervening position. I think that the time will come for all of them one of these days."

EVERYONE WHO GOES TO PRISON…

In regards to Başbuğ's trial, Çelik stated; "I think that where Mr. Başbuğ is being tried is exactly where he should be tried and not by the Supreme Court. Stating that having a report written against CHP Leader Kemal Kılıçdaroğlu for insulting the judiciary was something that "pleased CHP members", Çelik went on to state, "Mr. Kılıçdaroğlu, everyone doesn't become Prime Minister when they go to jail. Sinan Aygün went to jail and he didn't become prime minister." Çelik also responded to MHP leader Devlet Bahçeli's reference to the Silivri Prison as having turned into a 'Political Detention Camp', by stating, "If Mr. Bahçeli had referred to those detained at Yassıada in the same manner, then that would have been an accurate comparison. However, he can't, because one of the fundamental elements of the 60's coup was Bahçeli's mindset. This public does not love those that are pro-coup; they love those that prevent them."

Expressing that one million, 650 thousand people were victims of the September 12th coup and referring to the February 28th era as the "Gestapo era", Hüseyin Çelik went on to state, "I hope that coinciding with the start of these trials, this dark period will once again be brought to light. This should also be the case for the February 28th 'Post Modern Coup". This was a Gestapo era and a time where moral torture was committed. There may not have been guns pointed at anyone, however the tanks that drove through Sincan were actually running over the nation's will. This should not just be abandoned to be forgotten. The April 27th memorandum is also included in this. Mr. Kılıçdaroğlu states, 'Why aren't you trying this period', are we the ones trying to being with. Those that are trying September 12th are the prosecutors and judges. Just like how it is this nation's justice system that is trying the Ergenekon case, just how this nation's judges and prosecutors have taken on the Balyoz case, I believe that one of these days the aforementioned incidents will also be accounted for. The February 28th period was virtually a display of disgrace for Turkey. During this era, when call girls, drug lords, philanderers and reactionaries were all presented as tools, the media also became an instrument used at that time."