Algerian businessman throws down the gauntlet against France 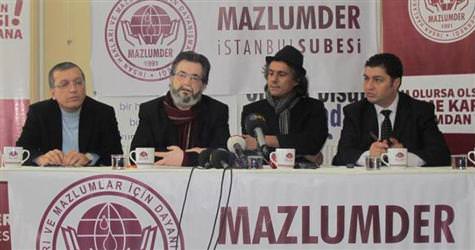 Rachid Nekkaz, a French businessman of Algerian heritage has set up a fund in order to help pay for the costs of being fined for denying Armenian allegations, should the bill be passed by the French senate.

Nekkaz says, "I have set up a one million euro fund (two million, 350 thousand liras) in order to pay for potential fines that could occur. Turkey is no longer the 'sick man of Europe'. And in order to show this, Turkey must display their stance against France in the harshest of manners. Because, this is the language France understands."

Nekkaz showed the check for the fund he has established in order to help pay for potential fines. The French businessman's name had previously surfaced to the limelight in connection to another fund he had established in order to pay for potential fines associated with France's burqa regulations. In Turkey, Nekkaz held a press meeting at the Fatih office of the Association of Human Rights and Solidarity for Oppressed People, or MAZLUM-DER.

Commenting on the 'denial bill' which was passed by the French Parliament, Nekkaz stated that Sarkozy's statements which followed the passing of the bill by the Assembly, was equivalent to staging a war against the Turkish government and public. Nekkaz also drew attention to Sarkozy's conducting policies in favor of Armenians being directly representative of his intentions to win over the 500,000 votes of Armenian residents in France and stated that in light of the games being played, he considers the Turkish public's reaction to be appropriate.

Emphasizing that the initiative amounts to an attack on Muslim nations, Nekkaz states, "Turkey is no longer the 'sick man' France thinks it is. Turkey should convey its reaction on every platform and in the harshest manner." Nekkaz also announced that should the law proposal be passed by the French Senate, they plan to protest the ruling on January 23rd with a press meeting which they will hold with their hands in handcuffs. Nekkaz states that he hopes to use the fund to pay his own fine that he will be given for his criticisms and expressed that he also wants to be the first person subjected to a political arrest on the matter.
Nekkaz also relayed the following suggestions to the Turkish government: "If the bill is passed by the senate, then Turkey should not remain silent. Turkey's Grand National Assembly should meet immediately in order to bring the Algerian genocide to the agenda and reach a ruling. I feel like I am a Turk." The businessman also referred to one question by stating that despite the Algerian Prime Minister's intentions to appear close to France, the views of the Algerian public differ.

SENATE TO MEET ON JANUARY 18TH

The French Senate will be deliberating the law proposal which would deem denying Armenian allegations regarding incidents that transpired in 1915 as a crime on January 18th. The Socialist Party senators, which make up a majority of the senate, are currently divided on the law proposal.